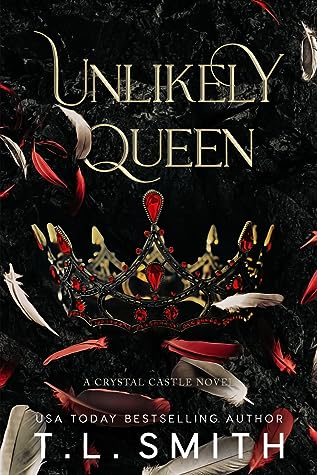 I love all things supernatural and Unlikely Queen encompasses several items under that umbrella. Vampires, witches, werewolves, angels, demons, prophecies, etc…This book is an epic tale that covers a lot of creatures and history, but also barely scratches the surface at times on how it all came to be.

Talia and her sisters, Tatiana and Tanya are witches in this new world run by an evil queen, but why exactly she’s evil is sometimes unclear. While there is a prophecy that one witch will take out the ruling queen and basically make drastic changes, that witch was never exactly named, but once Talia begins showing her massive powers it’s assumed it’s her. Even Talia deep down knows it’s her, but it’s never really explained how she knows either.

To take out the current queen, Talia enlists the help of other creatures, which takes her on a LOTR type of adventure, walking all throughout the countryside and having mini-adventures. There’s a lot of good in this book, but there’s a lot left unsaid, which makes the plot a little cloudy, but perhaps those loose ends will be answered in the next book.

I loved all the interaction between various supernatural creatures, especially with the angels and demons. That mix with otherworldly creatures was enjoyable for the overall plot. As for the romance aspect, it’s very mild, which isn’t completely unexpected with an epic adventure, but it was even more tame than even I was expecting.

I have a lot of thoughts on this book and I while I finished it with even more questions, perhaps they will be answered in the next book.

Synopsis:
The prophecy foretold of the true queen…
In the new world, where the old world is long forgotten, an evil queen sits on the throne, and anyone who challenges her reign is a mortal enemy—I am that enemy just by breathing.
The queen always gets what she wants, and she wants me dead.
Then one day, my life is turned upside down by a prophecy naming me the one true queen. I was oblivious to the true roles of the two men in my life—the Angel of Light and the Angel of Death—as my existence hung in the balance. One man there to save me, the other to claim me should the queen succeed in her quest for my blood.
But every time she nearly succeeds in my demise, my dark angel swoops in, pulling me back to safety. Making the world stop. Pulling everything back in balance.
Tired of being hunted by the vampires, slaves to the queen, I decide to fight back. It’s the only way to survive. I’m going to tear down the wards one by one and free my allies—the witches and the wolves—and then I’m going to force the queen from the safety of her castle and claim what’s rightfully mine.
Her kingdom.
Her throne.
Her crown.

That’s what my teammate’s sister-in-law told me after our one-night stand.

I didn’t expect to see Hollis again, let alone end up raising a child with her.

We set some ground rules–we’ll raise the baby together, but that’s it.
No relationship, no future, and definitely no kissing.

But the more time we spend together, the harder it is to keep track of where the lines were once drawn.

I’m known for my one-timer on and off the ice, but this game with Hollis just got a lot more complicated…