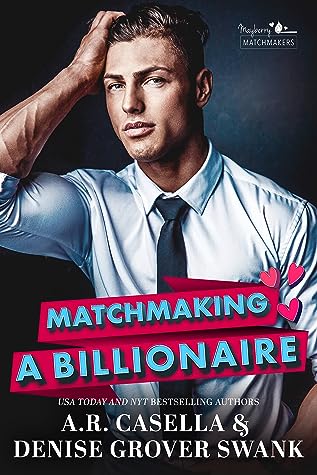 Matchmaking A Billionaire; Mayberry Matchmakers
(An interconnected standalone within a series)

Matchmaking a Millionaire had its ups and downs. There were moments I was completely tuned in and empathetic to the characters plight, then there were times I really struggled to engage. Overall, it was a good interconnected beginning to the Mayberry Matchmakers series.

Bryn Mayberry says to herself over and over that she’s a cold woman and it comes across the page. It’s only when she’s interacting with Rory that she lights up and isn’t a Debbie Downer, for lack of a better term.  As the last Mayberry sibling willing to work alongside her Nana, Bryn Mayberry takes all the criticism, grief, and lack of empathy as Nana is not only a hard business woman, but also a cold-hearted woman in general. Bryn fears becoming her as she ages, but she also can’t seem to stop the swan dive over a cliff, that is until Rory Byrne walks into her life. A man she’s supposed to matchmake with someone else. Bryn lights up around Rory and those are the moments I couldn’t stop turning the pages.

Rory Byrne didn’t step foot into Mayberry Matchmakers looking for love, he’s a businessman and he actually went there to start a matchmaking app. Nana Mayberry saw an opportunity and wasn’t about to let him leave without without matchmaking him herself and so the story unfolds. Thank goodness for Bryn stepping in and saving him from all of her Nana’s plans, who truly is a horrible person, but somehow she steamrolls over everyone to always get her way. Back to Rory and Bryn, they do light up the pages as they get to know one another and…holy smokes….the hot nerd is on fire when the clothes start to disappear. Rory is kind, generous, super smart, oh and did I mention his bedroom skills? Yeah, total package.

So like I said, the story has really good moments with others that I struggled through, but overall a really good start to this new town of Highland Hills, with more couples already lined up. Matchmaking a Billionaire is an interconnected series with other characters from past series popping in or mentioned, but it’s not pertinent to read those books, this is a complete standalone.

He’s everyone’s dream man but hers.

I used to believe in what we do at Mayberry Matchmakers, but now? Love is just another four-letter word.

Too bad my grandmother hasn’t gotten the memo. When tech billionaire Rory Byrne approaches us, wanting to develop the matchmaking app my sister and I dreamed up (and Nana shot down), she jumps at the chance. My grandmother is nothing if not opportunistic.

Of course, there’s a catch. She’ll only do it if Rory lets us matchmake him the old-fashioned way.

He’s going to say no.

Please God, let him say no.

The last thing I want to do is matchmake an entitled rich jerk…especially one who looks like sin and talks a good game.

I’ve screwed up in love a few times, but I never screw up in business. Mayberry Matchmakers has the idea for something amazing, and I have the money and the experience to make it come to life.

I should deny Nana Mayberry’s condition. If I let them matchmake me, it’ll be all over the news, and making headlines has never interested me…especially not after the personal betrayal that nearly broke me. But I’m having trouble caring about what I should do, because Bryn Mayberry is smart, snarky, and not the slightest bit impressed with me.

Actually, this may be Mayberry Matchmakers’ easiest job yet.