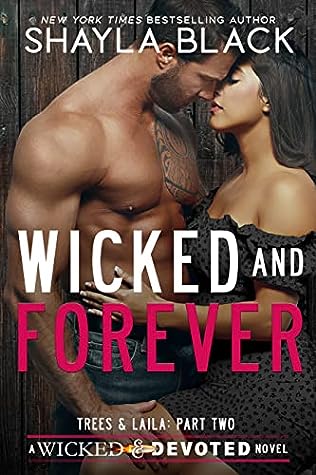 Review:
Reading this book was like reading the “Fast and the Furious”! Non-stop action, my heart was racing, and I kept wondering if everyone was going to make it out alive!!

From the very beginning, Trees and Laila have not had an easy road. From her abused background, always having to fend for herself and worry if she was going to survive to live to see another day, Trees only wanted to take care of her, but Laila is stubborn to a fault pretty much for every reason I just listed. Add in she is also extremely protective of her family, which makes her combative and strong willed, traits that make it that much harder for Trees to comfort her which is what his big teddy bear nature says to do. Trees has barely scratched the surface of getting to know the woman he wants by his side forever, but that may never happen when she slips through his fingers to return to the abusers he was protecting her from.

Laila doesn’t want to be put on a shelf and coddled, only be taken down when she’s needed. She hates owing anyone, she wants to be treated as an equal, but it’s hard not only in her culture to be treated as one, but in her life most men never see her period except as an object to be used. Her stubbornness usually gets her taken, almost gets her killed and beaten multiple times, but she’s extremely quick thinking which has saved her over and over again. She’s had to use her quick wits to survive as long as she has. She’s a strong woman and honestly the more I read her the more I respected her hard headedness. She is someone that I wasn’t sure would fit in the EM world, but by the end, her spirit and determination really won me over. I wondered if she would always clash with Trees instead of working together, because he too didn’t always listen to her, but by the end they both meshed really well together.

The second half of this duet is truly non-stop and I’ve loved how this team keeps growing and changing.

Synopsis:
He’ll make her his again…even if he has to seduce her.

When the woman he loves is taken, Forest “Trees” Scott abandons a mission to save her from the enemy. Fearing the worst, he moves heaven and earth to find her—until he realizes Laila Torres left him of her own free will for the man who used her for six years. He’s stunned and wrecked. She played him—and he fell for it. One thing he’s not doing? Giving up. He’ll find her and he’ll make her pay…in his bed.

Laila is devastated by her tormentor’s return, but when he threatens the bodyguard she’s so foolishly fallen for, she risks everything—including her life—to protect Trees. As a mere pawn in a deadly game played by factions of a cartel, she and Trees have no future unless she can somehow destroy them. But she doesn’t count on Trees hunting her down, stripping her soul bare, and insisting in the sexiest way possible that she belongs to him and always will.

But danger awaits around every corner, and secrets abound. As Trees and Laila fight for their future, their enemies close in. Will they let go of their hurts and trust in their love before it’s too late?

*This is part two of Trees and Laila’s duet. If you have not read part one, Wicked as Seduction, please start there.*

1 thought on “Review – Wicked and Forever by Shayla Black”