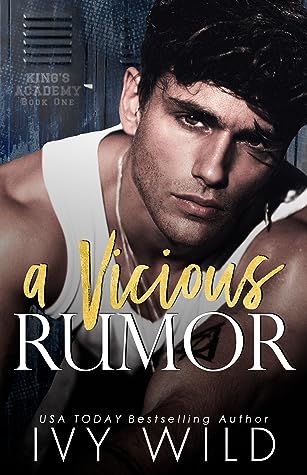 Vicious Rumor; Kings Academy #1
(A standalone within a series)

Review:
Not your typical bully romance. This is a coming of age, soul-mate love story.

Tyson “Rock” Stone is the school’s bully. His life is basically a mess, but his one shining light is when he met a girl named Lily White. She saw something more in him than just the broken boy he is and for the first time in his life he felt like more than just the mess and mistake that he is currently called.

Tyson doesn’t make friends, he doesn’t connect with anyone in his life, so when he meets Lily his entire world lights up. However, he quickly realizes that his messed up life could tarnish hers so he pushes her away. This actually changes the trajectory of their relationship and sends Lily down a different path.

Lily strikes a deal with Zachary “Scissors” King, one of Tyson’s arch nemesis. That deal is supposed to bring her back into Tyson’s life, instead it only seems to tear them further apart. She begins to wonder if the tears in their relationship can ever be repaired and perhaps she misread how close they actually were.

Their story is angsty and full of bumps, but has lots of bright highlights too. I love Lily’s relationship with the seniors at the senior center and Luca “Paper” is super intriguing, also if you’ve noticed the theme of the nicknames; Rock, Paper, Scissors – yes there is a meaning behind those, but I’ll let you discover it for yourself.

Synopsis:
Lily:
The first time I met Tyson Stone, he gave me a bloody nose.
He didn’t mean to hit me, he was fighting this other kid, but let’s just say I’d take the pain of his fist over his cruelness any day of the week.
Five years after this incident, and I’m in his shark tank.
His domain. His kingdom. His prep school.
Freefalling for him is a recipe for disaster, but that’s what happens nonetheless.
Then he starts pushing me away for no reason, but there’s one thing he forgets.
I’m not one of his disposable flings. I’m worthy, I’m a catch, and if he doesn’t realize it…well, then his arch-enemy will.
Dating the guy he hates the most could backfire.
But I’ve always been good at playing with matches.

Tyson:
My life is a series of calamities strung together by blood and bad press.
Wherever I go, trouble follows.
Now, normally I’m not a charitable guy, but when I pass on Lily White’s delectable body, it is entirely for her own good.
Call me an altruistic jerk, but I just don’t want to see her hurt.
That’s until she starts dating the guy I loathe more than anything else in the world.
That’s when all bets are off.
We’re playing a dangerous game, her and I.
The rumors are starting to swirl, and so are some dangerous thoughts about what I can do to her.
Lily White is out of my league,
but apparently, that’s not going to stop me.

2 thoughts on “Review – A Vicious Rumor by Ivy Wild”