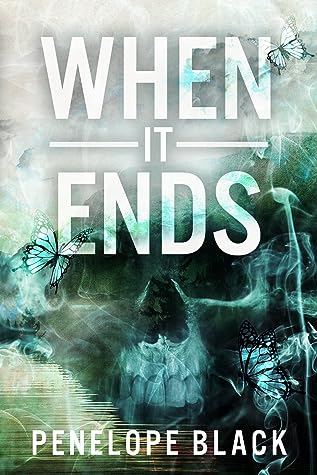 When It Ends
(A standalone)

When it Ends was non-stop action where I could picture all of the best CGI action, end of the world movies literally in my mind. The fast moving plot kept me up reading late, late, late because once I began this book I could not put it down. This is definitely a book that is read cover to cover.

Amelia – (Cher, Ames, Mia), is just returning to Vegas after being gone for five years. Her father is seismologist and is one of the members on a team who has predicted the coming end. Among all of this doomsday knowledge, Amelia runs into her past, well…everything. West and Cole were her best friends, her first crushes, and some of her firsts in other ways as well. When she left Vegas she was crushed, but there is a lot of backstory there that just needs to be read to make everything fit.

West is very accepting of Amelia’s return. He’s the sunshiny, happy guy out of the three, but he’s also Cole’s best friend, which is where some of the tension lies. Cole is bitter and angry that Amelia left five years ago and his walls are high and covered with thick thorns. These two have been thick as thieves for years. Growing up in the foster system together they are brothers in every sense of the word aside from blood.

To round out their bunch, and probably my favorite character, is Gray also known as Sonny. Amelia meets him before she even makes it back to Vegas. I like to think of him as fated for their survival and to Amelia for sure. His presence within the group is that final piece that holds everything together. Every time he’s on the page I love what he brings either to the group or individually.

Their trip to safety is wrought with world-ending disasters. It’s do or die time and the four of them have to make it, so it’s time to put the past to rest so they have a future.

Synopsis:
They stole my heart at fourteen and broke it before we even graduated from high school. It’s been five years since I’ve seen them, and only a twist of fate reunites us when the mountain falls. It’s the first disaster in a predicted apocalypse—a string of natural disasters that could be catastrophic.

It’s the beginning of the end of everything.
Finis omnibus.

Old feelings reignite and new feelings blossom as the four of us form an unbreakable bond. As the world starts to fall and society fractures, it’s a race against time for survival.