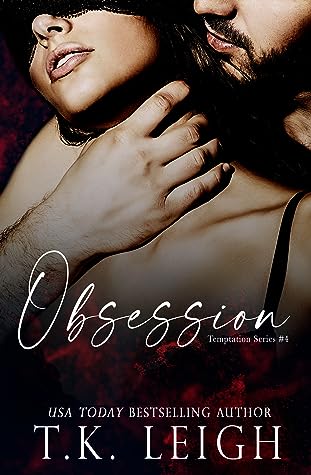 Obsession; Temptation #4
(#4 within a series)

Review:
Obsession puts the meaning of that word on a whole new level. Beware a killer who is obsessed – shudder.

This entire series has been a whole new roller coaster of WOW’s! and OMG I did not see that coming, to Daaaaammmmmnnnn that’s hot. The mixture of passion, intrigue and suspense has been like nothing I’ve read before. A truly brilliant, well thought out story.

We were left with the knowledge from the last book that Nick, Julia’s sociopathic ex, had escaped prisoner transport and was currently on the run. That’s terrifying in itself, but he’d basically threatened Julia right before his escape that he’d come after her. Gulp!

While I’d personally leave the country or change my own identity…I know this is fiction…plus, Julia has her daughter, Imogene to think about along with her new boyfriend who is famous as well and Lachlan is heading into his final games before the playoffs. Julia has a lot on her plate and hates the thought of her psycho ex disturbing her now peaceful life. So, I suppose fiction or not, there is a lot to consider.

Lachlan hates being torn between his job and trying to protect his new family, because he does consider Julia and Imogene family. He has proven again and again how strong he is for someone younger than Julia, but he’s wise beyond his years and has battle scars that have aged him as well. I loved his character.

I kept going round and round trying to dig out who the copycat killer was, right up until it was revealed. I tell you what…I was shocked. That’s excellent writing because I would never have guessed how everything played out and lined up to the very end. Brilliant, absolutely brilliant.

Synopsis:
One week. No names. No expectations.

That was our agreement.

We were supposed to walk away after our time in Hawaii was over.

Before I learned who she is.
Before I realized how interconnected our lives are.
Before I fell in love.

But our love isn’t the stuff fairy tales are made of.
Demons lurk around every corner.
Good doesn’t necessarily prevail over evil.
And the knight in shining armor may not save the day. Not if her murderous ex-husband has anything to do with it.

I just hope she’s finally learned to believe in herself. 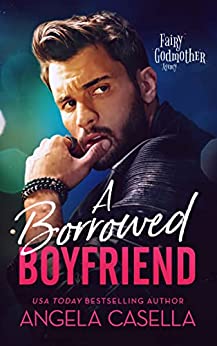 A Borrowed Boyfriend; Fairy Godmother Agency #1
(An interconnected standalone within a series)

Review:
A light, whimsical romcom involving a fake boyfriend, a jilted bride meme, and a fairy godmother team who comes to the rescue.

This is a brand new interconnected series set in Asheville filled with tons of fun. From the very beginning the hero and heroine have great chemistry and the secondary characters offer the perfect ebb and flow to the plot without getting in the way. It’s the right mix for a good romcom.

Marnie lost her father and was a jilted bride (who became a popular meme of said jilting) all within the last year, she’s currently not living her best life. When her famous sister – yes, famous – asks why she couldn’t have possibly moved on yet, well…Marnie’s had enough and makes up a fake boyfriend named Mitchell Mountainbottom – yeah, Marnie doesn’t work well under pressure.

Do you know who does work well under pressure? Her new fairy godparents, that’s who. Nicole and Damien send Mitchell Mountainbottem to Marnie’s doorstep the very next morning, well, really his name is Griffin, but he’s sweet and completely fake, so he goes along with the awful name and lots of other things in the name of helping out a woman he actually likes.

You know what they say, no good deed goes unpunished. Sadly, Griffin for all of his helpfulness and sweet intentions gets caught up in a can of worms he didn’t exactly plan on opening, but then again, he knew that can was sitting on his shelf.

Griffin is everything a boyfriend should be; dashing, handsome, thoughtful and sweet, but there is a darkness to his past that doesn’t allow him to open up, not like Marnie who is an open book and easily loves and trusts everyone she meets. These two are adorable together and rock the charts for chemistry, but could their fake turn into something real?

A Borrowed Boyfriend is mischievous in the best of ways with lots of colorful side characters and charming fun romance.

Synopsis:
On a scale of one to ten, how bad is it that I want to see my fake boyfriend naked?

What’s worse than being left at the altar? Becoming a meme because one of your nearest and dearest took a video of you running—and falling—down the aisle and made it internet famous.

Yup, I’m that Marnie Jones. My sister is for-real famous, which only makes people more interested in my predicament. Is it any wonder I’m feeling down?

My best friends will try anything to cheer me up…including setting me up with the Fairy Godmother Agency, a maybe-crazy husband and wife private investigator-slash-life coach team who promise to find the person who sold me out. Better yet, they lend me a fake boyfriend to make my ex jealous and appease my sister.

Griffin is gorgeous, attentive, and a very convincing actor. He’s perfect for the job.

After a lifetime of practice, I’m good at pretending. But the more time I spend with Marnie Jones, the less I have to feign my interest in her.

She may be down, but she’s not out. She’s beautiful, funny, and just the right amount of weird. All she needs is someone to remind her of that.

If I weren’t such a screw up, I’d have half a mind to do it myself 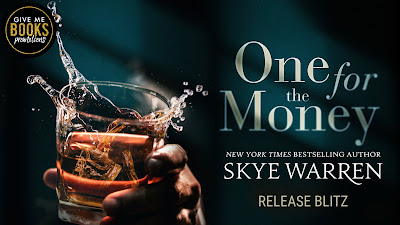 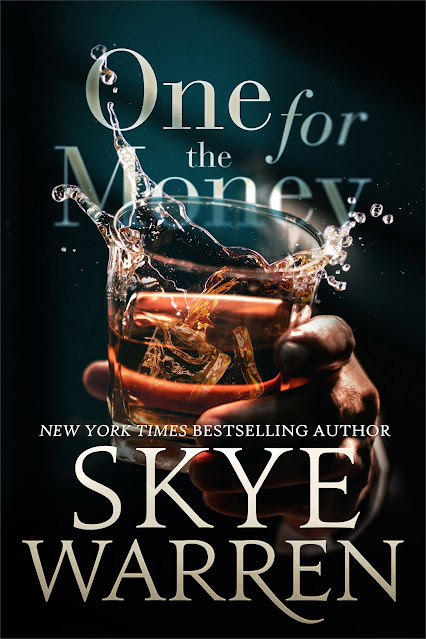 Title: One for the Money
Series: Hughes #1
Author: Skye Warren
Publisher: Dangerous Press
Genre: Billionaire Romance
Release Date: May 31, 2022
BLURB
Finn Hughes knows about secrets. His family is as wealthy as the Rockefellers. And as powerful as the Kennedys. He runs the billion-dollar corporation. No one knows that he has a ticking time clock on his ability to lead.
Eva Morelli is the oldest daughter. The responsible one. The caring one. The one who doesn’t have time for her own interests.
Especially not her interest in the charismatic, mysterious Finn Hughes.
A fake relationship is the answer to both their problems.
It will keep the swarming society mothers from throwing their daughters at him.
And it will keep Eva’s mother from bothering her about marriage.
Then the fake relationship starts to feel real.
But there’s no chance for them. No hope for a woman who’s had her heart broken. And no future for a man whose fate was decided long ago.
“As soon as I heard Skye Warren wrote a fake dating book, I dropped everything and savored it cover to cover. Finn Hughes is a cinnamon roll hero.” – #1 New York Times bestselling author Tessa Bailey
ADD TO GOODREADS 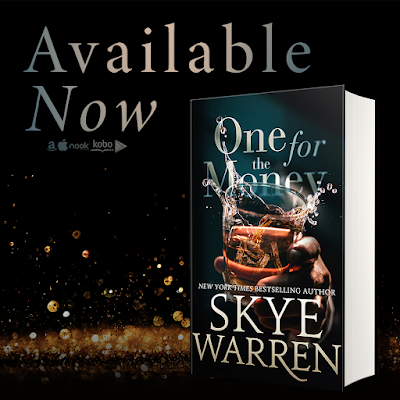 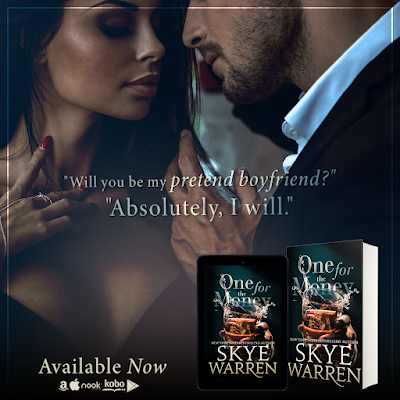 Read Kay’s Review: One for the Money
AUTHOR BIO
Skye Warren is the New York Times bestselling author of contemporary romance such as the Chicago Underground series. Her books have been featured in Jezebel, Buzzfeed, USA Today Happily Ever After, Glamour, and Elle Magazine. She makes her home in Texas with her loving family, two sweet dogs, and one evil cat.
AUTHOR LINKS
FACEBOOK
TWITTER
INSTAGRAM
YOUTUBE
PINTEREST
WEBSITE 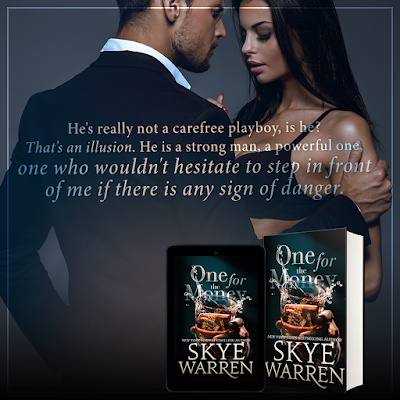 Bruised But Not Broken by Nicole Dyken is LIVE!

One click Bruised But Not Broken by Nicole Dykes now!

About Bruised But Not Broken

This is my nightmare. When I think of a support group, I think of sad people sitting around talking about their feelings and nothing changing.

And yet, when my brother and his best friend, who happens to be a therapist, presented the idea of holding the meetings at my gym, I caved.

Because I, Benjamin Price, have always tried to rescue the people in my life. But I can’t. I’ve usually failed them.

Now, I’m hosting a trauma support group and desperately trying not to fall into my old habits—of attempting to save everyone.

And then, he walks in.

Bruised. But not broken. No matter how exhausted he may feel, a strength in him calls to me.

And there’s no way I can ignore the need deep inside me to at least try.

Not to the abusive relationship I told myself I was okay with for years.

But what am I supposed to do?

I have no real life skills. All my life, I’ve been told I’m pretty and that’s it.

Then I walk into a gym, looking for a job, but I find so much more.

I don’t want to trust Ben. I don’t believe his help doesn’t come with a price.

But what choice do I really have?

One thing’s for sure . . . Neither of us are getting out of this intact.

What we lose though, that’s anyone’s guess.

Bruised But Not Broken is set around a trauma support group and will, therefore, touch on extremely sensitive subjects. I’ll always do my best to handle these topics with care and healing, and with no intention of hurting anyone. But please, heed this warning if you have any triggers.

Nicole Dykes is a wife and a professional assistant/mom to two gorgeous girls. Currently residing in Kansas, she’s a lover of coffee, Kansas City Chiefs, and all things romance. She currently has over 20 published books with her Monroe and Adamson series being the most popular. She enjoys cranking up the angst level, making her readers cry, and turning those tears into the coffee that fuels her writing.

I won’t stop until all those who wronged me are punished.

Losing my innocence at thirteen, in the most brutal way, changed me. My kidnapper stole my childhood and tried to break me. The knowledge my father orchestrated the entire situation hardened my heart, and instead of grieving his death, I celebrated it.

One down. Many more to go.

My burning need for revenge has only grown over the years, keeping me focused on my goals and enabling my rise to power.

Made men are weak. A pretty face and the promise of a good time easily distracts them.

Men bow before me.

Except for him—the brother of my abductor. Massimo fights me every step of the way, but I’m not about to let the explosive chemistry between us deter me from my chosen path. His family is my enemy. He is my enemy, even if he doesn’t know it yet.

I won’t stop until all those who wronged me are punished.

By the time they realize I’m coming, it will be too late.

They tried to take everything from me.

But where they failed, I will succeed.

Unless he becomes my weakness.

Grab your copy today or read FREE in Kindle Unlimited!