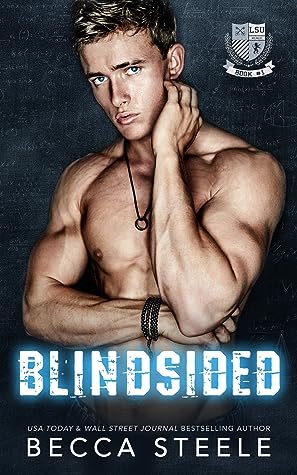 Blindsided; LSU #1
(A standalone within an interconnected series)

Review:
Absolute angsty, emotional perfection!! The perfect book to kick off my reading for LGBTQ+ month. Liam’s bi-awakening was moving and heartfelt and Noah was the perfect partner to guide him on that journey.

My heart melted for these two men over and over. It constantly went back and forth wavering for who to side with. It bleed for Noah and his need to be needed and accepted. While he’d been openly gay for years, it’s still not an easy path for young men to travel down. His history of being used as an experiment by straight boys bruised his self esteem time again, so he was leery when Liam, a boy who claimed he was straight, kissed him. Yes, Noah was attracted, but he wasn’t about to make the same mistake he’d made in the past. Sweet, sweet Noah. I wanted to hug him over and over.

Liam is torn in two. He doesn’t understand his mixed up feelings and his new housemate,Noah, throws him out of whack time and time again. Liam’s only ever been with women, but there is something about Noah that draws his eyes and he can’t seem to stop staring. Liam’s entire world gets flipped upside down and he doesn’t know what to do or if he wants it flipped back. He recognizes that he’s never felt this way, but those particular thoughts also scare him. He’s a mess and that angst is heartbreaking. The man we meet in the beginning is not who we get to know by the end, so Liam’s journey is A-MA-ZING!! I also want to throw my small two cents in on a very tiny scene with his mum…totally brought tears to my eyes and I loved her!! Everyone needs unconditional love in their world, so thank you to Becca for giving us that.

Their journey together isn’t all sunshine and flowers. They both have baggage and issues to hurdle, but it was also very realistic. Probably one of the more realistic bi-awakening journey’s I’ve read and I really enjoyed the authenticity of their relationship, while still keeping it steamy and in a place where I could escape my own reality if that makes sense.

All of the secondary characters were fantastic, I believe some might be from other spinoff series, but this is my first solo Becca Steele book, as I’ve only read co-authored books of hers, but I didn’t have a single problem catching on to who they were or references they made. So jumping in to this book was easy peasy.

Synopsis:
My first year at university started with a bang…literally.
I crashed into someone’s car. Even worse? It turns out that the person I blindsided is my new housemate, Liam, second-year student and football player.

It’s hate at first sight…until it isn’t.
But even if he doesn’t hate me anymore, it doesn’t change the fact that he’s straight.
At least, I thought he was.

One night, one kiss, and everything I thought I knew turns upside down.
They say actions speak louder than words.
And his actions tell me that he wants me.