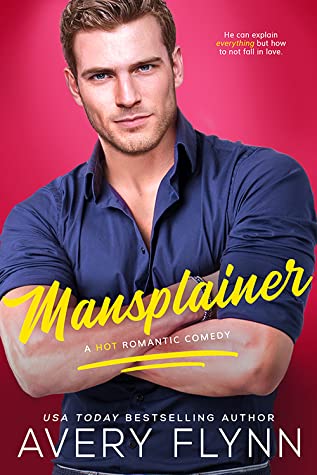 Mansplainer; Last Man Standing #3
(An interconnected standalone within a series)

Review:
Mansplainer is cute, sweet and just all around adorable!!! I was all in for Griff, but he needs to move over because Nash is my new book boyfriend!

Nash may be an over the top mansplainer, but he has a huge heart of gold. He really can’t control his impulses to help in literally every situation, it’s just his nature to make everything better, whether you are family or complete stranger or even want it. So when he meets Chelle Finch and she’s one of the first people ever not only to not take his helpful advice, but to also help guide him away from his mansplainer ways he can’t help but be a little enthralled by her.

Chelle Finch finds herself in a dire need of a husband. When her father passed he left an antiquated stipulation in his will that says that in order to keep her foundation running she has to be married. With time running out and a misogynistic uncle trying to take over she has few options, but when an eccentric woman reads her fortune in the park which leads to a strange meeting at the dog park…well…I suppose that means her new husband is one gorgeous, mansplaining Nash Bennett.

Nash never wanted or even expected to fall for anyone. He thought for sure he’d be the winner between his cousin’s in their Last Man Standing bet, but the more time he spends time around Chelle the less sure he actually is. Chelle is unlike any woman he’s ever met and their agreement may have started as temporary, but he might actually like to keep his wife, if only she felt the same.

I totally emphasized with Chelle, as a woman in her forties, she is hard working and sometimes feels fed up with society and all of its norms. I too have had too many men tell me what to do and have reached a breaking point, but Nash understands her and I love them together.

Chelle also appreciates Nash and his overeager mansplaining. Instead of brushing him off or being mean, she gives him better direction. Something he really enjoyed. He’s a fixer at heart and enjoys pleasing people so when it’s directed to better use, well then he was a happy man. In turn, she saw that no one really cared for him since he spent all of his time caring for others, and she finds she really enjoys tending to Nash. They make the perfect pairing for this adorably cute couple.

Synopsis:
As the only Beckett cousin who is still unattached, I’m a shoo-in to win the bet with my cousins to be the last man blissfully not in love by Christmas. Of course, I know they’re still going to make me follow the rules of our bet and go on six dates with the same woman—but I’ve figured out a way out of that too. I’m getting married. Is it love? Not even close. Chelle Finch needs a temporary husband and I need to win this bet. We agree to put a ring on it knowing that in six months this marriage of convenience will end in divorce. Except, somehow dating my wife has me realizing that I don’t ever want to take this ring off if it means losing her.

What does the guy who can talk his way out of anything have to do to sweet talk his temporary wife into forever?

Each book in the Last Man Standing series is STANDALONE: