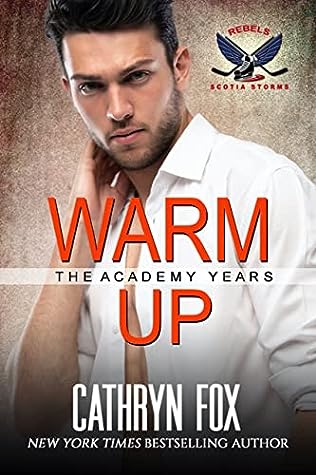 Warm Up; Scotia Storms #2
(A standalone within a series)

Review:
Warm Up is sweetly endearing and full of all the warm, buttery, never-want-to-stop-reading feels.

Matt has only ever had one purpose in life, hockey. He’s never had to focus on anything or anyone else, but as he’s reaching the end of his college career and the NHL life is looming, all the shallowness of having nothing else or noone else to worry about is beginning to settle within him, and well…the deeper waters of life begin to look less scary. When Matt meets Kennedy he’s instantly hooked and it really hits him that he might not exactly be prepared for her and all of her life experiences, but for the first time in his life he’d actually like to try.

Kennedy is a single mother, going to school and has two jobs that barely make ends meet. She definitely doesn’t have time to date, but perhaps a little one on one action with a hot hockey player would sooth the itch. When Matt walks into her life she thinks she might have found a solution to solve one of her problems. It’s been way too long and she knows all about his reputation so it should be easy to walk away, except when it isn’t. Matt ends up being way deeper than she initially thought and the moment he meets her daughter…ovary explosion!

Matt and Kennedy shine and radiate when they are around one another. Neither of them are relationship gurus, but their intimacy and sweetness roll off the pages and they become better versions of themselves by being together. That is what love does. It is the small moments that all bundle into a lifetime of big ones. It’s the fact that someone makes your life better just by being in your presence and Warm Up is one of those stories that made me warm up from the inside just by reading it.

Synopsis:
He’s a defenseman on the academy’s hockey team – a well-known player on and off the ice.

It’s a reputation he wears proudly…flaunts, even. The only one he has to look out for is himself. No one expects anything else.

Thanks to past mistakes, I have a whole lot of responsibilities outside of the academy, and have no choice but to put others in my life first. They count on me, but you know what? I’m lonely.

I guess that’s why I got all tangled up in the guy whose only focus is on hockey – and fun.

What I hadn’t meant to do, however, was fall head over heels for the player who only wanted one thing from me. Can you say been there done that?

But I think, underneath it all, there’s a lot more to him than even he knows and maybe his choices aren’t his own. Maybe someone else is pulling the strings.

Either way, when past mistakes catch up with me again, the team’s biggest player must decide whether to follow the path carved out for him and walk away from me, or shape his own future, and become the man he keeps well hidden.