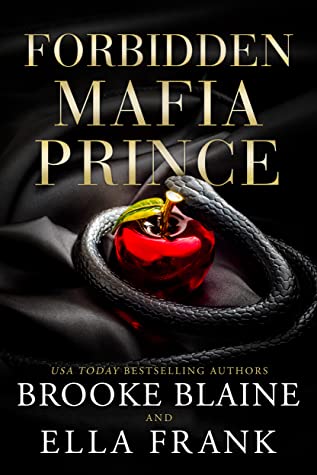 Forbidden Mafia Prince; The Malvagio Duet #1
(#1 within a duet)

Review:
Fantastic suspense from the very beginning that never once let up with a forbidden chemistry that built between the main characters that was explosive and wicked hot! It’s also full of adrenaline pumping, knuckle biting, page turning action!!

Kidnapped right off the street, Luca is held captive with no idea as to why he is taken hostage or what his dark captor wants with him.

A war has begun and as the heir to the Rossetti kingdom, Dom has been told he will sit this one out, locked away with the very prisoner who is at the center of it all.

Frustrated with only himself to rely on, Luca has more questions mounting by the day and no one will answer them. Trapped with his captor only seems to mount confusion on his swirling emotions, and Dom’s dark attitude only seems more enticing as the time ticks by.

Forbidden Prince is fast paced and just so, so good! The tension, the action, and all the mystery…I can hardly stand to wait for the next book because I need to know how everything is going to end for these two. I’m on pins and needles here!!!

Synopsis:
“What are you going to do with me?”
“Whatever the hell I want.”

In Manhattan, tensions are rising.
In a play for power, the Rossetti family has made a decisive blow, crippling their rivals—an act that has forced the Fiores to make a desperate move to maintain their supremacy.

Many miles away, Luca Davis, a young medical student, has no idea his life is about to change.
No idea that everything he’s been told about his life has been a lie.
Enter Domenico Rossetti, the ruthless Mafia prince. Powerful and unforgiving, he’s a savage in a suit—and the one who holds the cards when it comes to his new captive.

But when the war escalates and both are forced into seclusion, the two men are faced with a new threat: the rising sexual tension between them.
You don’t fall for the one person you’re supposed to hate, but it’s a temptation neither can resist.
Because falling in love with the enemy isn’t only wrong—it’s forbidden.
And the cost for defying everyone will be their lives.

Stalked But Not Afraid by Nicole Dykes is coming August 2nd and we have the STUNNING cover to share with you today!

Preorder your copy of Stalked But Not Afraid by Nicole Dykes today!

Cover Designer: Ari with The Hatters

About Stalked But Not Afraid

He’s an influencer—whatever that means. He’s also stunningly beautiful with a feisty attitude I can’t deny intrigues me.

But more importantly, he’s in trouble.

I’m not like my brother. Except for being a cop, I don’t strive to save the entire world.

However, I find myself compelled to save him.

If he’ll calm down and just let me.

He’s everything I despise. He’s a cop. An arrogant tough-guy type who thinks he knows everything.

He drives me insane and won’t take the hint that I don’t want or need his help.

I’m not weak, and I’m not as defenseless as I once was either.

And still, I can’t seem to fully push him away.

Because maybe this time—just this once—I want to be saved.

**Stalked But Not Afraid is a standalone with a HEA in the Spark of Hope Series. It’s set around a trauma-support group and will, therefore, touch on extremely sensitive subjects. I’ll always do my best to handle these topics with care and healing and with no intention of hurting anyone. But please, heed this warning if you have any triggers.

Nicole Dykes is a wife and a professional assistant/mom to two gorgeous girls. Currently residing in Kansas, she’s a lover of coffee, Kansas City Chiefs, and all things romance. She currently has over 20 published books with her Monroe and Adamson series being the most popular. She enjoys cranking up the angst level, making her readers cry, and turning those tears into the coffee that fuels her writing.

She may be the girl of his dreams but he can’t remember.
And what happens when he does?

When East Coast elite and wealthy bachelor Gavin Williams wakes up in a rural West Virginia hospital, he doesn’t remember who he is or where he’s from.
He doesn’t remember his heiress fiancée, his luxury homes, his exotic travels, or his private plane.
And he especially doesn’t remember insulting local country-girl and fiery redhead Jamie Sutton, smashing her dreams, and leaving her in a pinch.
So when a redhead in overalls stands over his hospital bed and convincingly tells him he loves banjos, hound dogs, and rustling chickens, what’s he supposed to do?
Suddenly Gavin is scrambling to fit into a country life that doesn’t feel familiar and that can’t possibly be his. A wife? Kids? A chicken coop?
His life is full of holes and secrets, desires and dreams, and as Gavin learns more he begins to wonder—will he ever remember? And what happens when he does?

About Sarah Ready
Author Sarah Ready writes contemporary romance and romantic comedy. Her books have been described as “euphoric”, “heartwarming” and “laugh out loud”. Her debut novel The Fall in Love Checklist was hailed as “the unicorn read of 2020”. She loves to write fast-paced, emotionally compelling romances about quirky, smart women and the men who love them.

Before writing romance full-time Sarah had lots of fun teaching at an Ivy League. Then she realized she could have even more fun writing romance. Her favorite things after writing are adventuring and travel. You’ll frequently find her using her degree at a dino dig site, crawling into a cave, snorkeling, or on horseback riding through the jungle – all fodder for her next book. She’s lived in Scotland, Norway, Portugal, Switzerland and NYC. She currently lives in the Caribbean with her water-obsessed pup and her awesome family.
You can visit her online at http://www.sarahready.com

The Godparent Trap by Rachel Van Dyken is now live!

Life’s Too Short meets The Unhoneymooners in this sparkling, steamy, and swoon-worthy novel from #1 New York Times bestselling author Rachel Van Dyken, in which two sworn enemies must share house, home—and maybe their hearts—when they become co-parents after a sudden loss.

Colby’s living her best life: as a popular food blogger, she gets to fulfill her dreams of exploring the globe. But her world comes crashing down when a tragic accident leaves her co-guardian of her best friend’s two adorable children. Not only does she need to put down roots—fast—but she’ll be sharing custody with the one man she can’t stand sharing a continent with, let alone a house.

Accountant-extraordinaire Rip values rules and plans. But when he loses his sister and his best friend and becomes an insta-guardian all in one night, Rip sees his organized life imploding. What he really doesn’t need is his sister’s irresponsible, flighty—albeit kind and gorgeous—best friend making it worse.

Rip doesn’t trust Colby to take their new responsibilities seriously, while Colby can’t believe Rip thinks children will thrive under his rigid control. Yet soon Rip and Colby discover they need each other more than they hate each other. Could it be possible that following their hearts is just what their new little family needs?

Rachel Van Dyken is the #1 New York Times Bestselling, Wall Street Journal, and USA Today bestselling author of over 90 books ranging from contemporary romance to paranormal. With over four million copies sold, she’s been featured in Forbes, US Weekly, and USA Today. Her books have been translated in more than 15 countries. She was one of the first romance authors to have a Kindle in Motion book through Amazon publishing and continues to strive to be on the cutting edge of the reader experience. She keeps her home in the Pacific Northwest with her husband, adorable sons, naked cat, and two dogs. For more information about her books and upcoming events, visit www.RachelVanDykenauthor.com