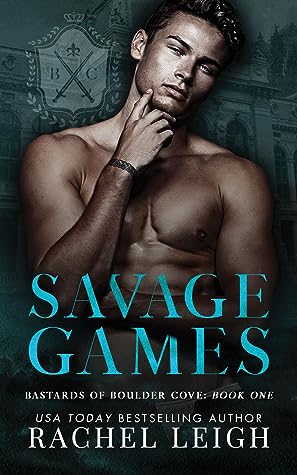 Savage Games; Bastards of Boulder Cove #1
(#1 within a series)

Review:
This is a dark, stalker type intense story, with a hint of mystery, that showcases a smart-mouthed heroine against three angry-rule-the-school boys…ALL THE YESSESSSSS!!!!

I stayed up soooooo late that I seriously thought of calling in with the – I’m sorry I have a book hangover – excuse the next day.

Scarlett is a total bada$$. She never backs down, never once gets distracted by their gorgeous faces, their wicked games, manipulative play or emotional warfare. (I have a serious girl crush on her.) Scarlett used to be friends with Neo, Crew, and Jagger, but then tragedy struck and now they are enemies. They don’t hold back and neither does she. This book is a total wild ride and I couldn’t turn the pages fast enough to see what would happen next.

All four of the main characters have grown up together so it would have been so easy to fall back into a relationship of comfort, especially one between Crew and Scarlett. Those two are the closest, of had the closest relationship in the past, but they also suffered the most damage in their friendship. While this book only has a POV that switches back and forth between the two of them, there is definitely something brewing between all four. It was kind of neat to only get the perspective of only two of the characters when this story actually involves more, so I’m really curious how everything will play out going forward and what insight we will be privy to.

As for the other guys; Neo is the leader of the three guys and by far the meanest, but in small and I mean extremely small doses you see him play nice and in those moments he could have easily broken down walls with Scar, but there is more to his tough shell, we just don’t get enough of him…yet.

Jagger is an entirely different story. He’s always played in the gray when it comes to Scarlett’s emotions. Never being too nice, but never being ulta mean either. He finally unveils a bit more of himself, which should lead to some interesting times ahead.

I’m really excited to jump into more of this story. This first book left on a mysterious cliffhanger and I”m totally salivating for more, more, more!!

Synopsis:
I shouldn’t be here.

Let me rephrase that…
I never wanted to be here.

I didn’t ask for any of this.

Not the society I was born into.
Definitely not the academy I’m supposed to attend.
And sure as hell not the group I’m forced to play nice with.

Unfortunately, one too many school suspensions has catapulted me into the world I swore I’d never live in.

Boulder Cove Academy: Where The Lawless reign and those beneath them are ash between their fingertips.

The three leaders of this place—Crew, Jagger, and Neo—have always been an aching thorn in my side.

When things get ugly, I have no choice but to turn to the boys I loathe.

Acceptance means I become a slave to their darkest desires.
Bones to rattle.
A mind to shake.

In the thick of it all, I begin to see the truth. They never intended to help me.
They only want to destroy me.

One game at a time.