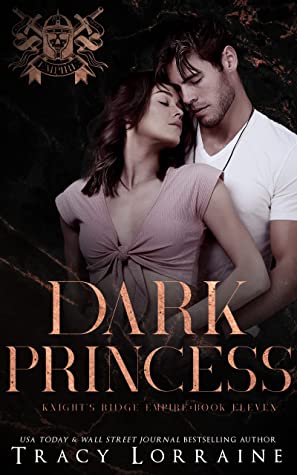 Dark Princess; Knights Ridge Empire #11
(#2 within a trilogy, #11 within the series)

Review:
What a roller coaster ride of emotions! Dark Princess is the full gamete of feels, ups, downs, and complete emotional wreckage that I love from Lorraine’s books.

Dark Princess opened Batman, WIDE open. His tortuous past, his emotional spirit was flayed wide open for Calli. I wanted to give him a huge hug, especially for the little boy he was when he sustained all of his trauma. I was all up in my feels with his backstory. Calli couldn’t be more perfect for him as the balm to his soul, but unfortunately it will still be one more book until that happens. I’m sending my virtual hug to him now, even though he isn’t much of a hugger, except for his Angel.

Calli really takes off as not only a mafia princess, but a dark one at that. She is truly stepping into the world she was born into and I’m loving her character the more I read her. She is becoming her own person, different than Stella and Emmie, and I love that about her.

Like every second book in a trilogy, I both love and loathe them. It’s that happy medium point where everything is perfect until everything speeds up to another cliffhanger – and whoa, what a whooper- before the ending of the book, which is also torturous because it’s at that point I realize I never want the trilogy to end. Do you see my struggle, it’s real.

This couple, how Tracy makes me love each one more and more, but seriously, they are my new favorite. The dark vs. light or just the overall vibe of the story, whatever the combination is, I adore them together and can’t get enough!

I was playing with fire. I knew that.

I’m the one who lit the match.

But the possibility of getting burned still wasn’t enough to stop me.

I wasn’t only dancing with the devil.

But his brother… and our enemy.

Everything was going to come crashing down around my feet… it was inevitable.

I just never expected it to happen quite so fast.

Dear reader,
Dark Knight is the second book in Calli and Batman’s story, the fourth trilogy in the Knight’s Ridge Empire series. If you like your alphas dark and your romance full of angst, then you’re in the right place!

Start the trilogy for FREE with Dark Halloween Knight: https://amzn.to/3lRRHXh 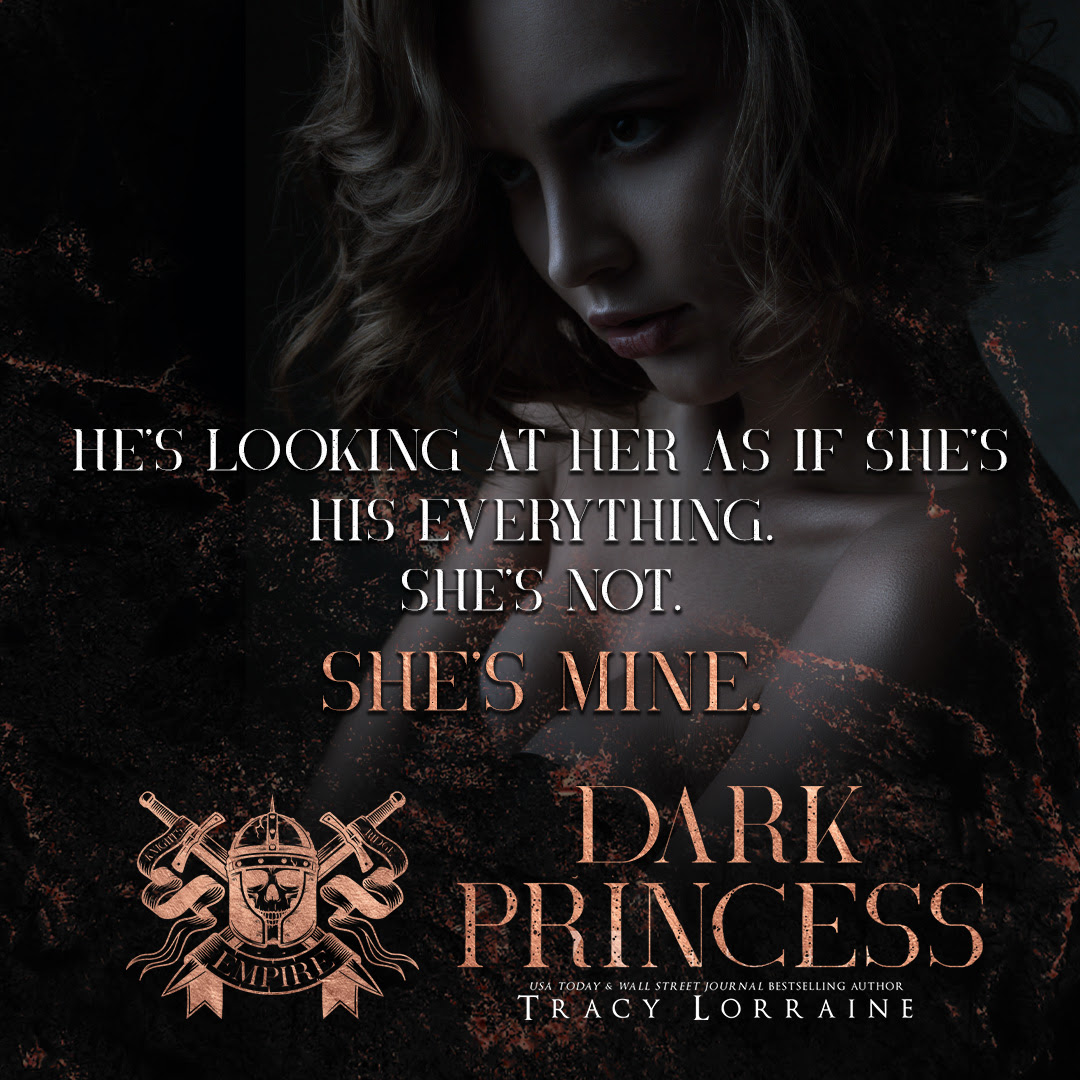 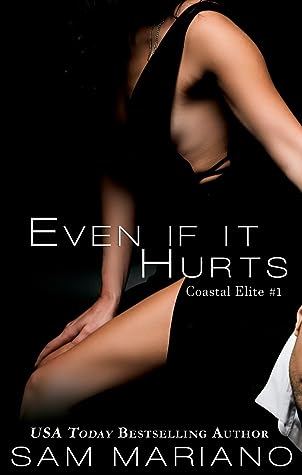 Even If It Hurts; Coastal Elite #1
(Standalone within a series)

Review:
Even If It Hurts is a morally corrupt, walking gray lines, villainous anti-hero book. This new adult, psychological, dark romance was a page-turning ride that I could not put down.

For anyone familiar with the movie Cruel Intentions, the beginning of this book definitely gave off some serious Cruel Intentions vibes, but it didn’t take long for Even If It Hurts to take on a flavor all of its own.

Dare is a true psycho. His lack of empathy, high intelligence and solitary focus made his character fascinating to read. I’m not sure what it is lately about reading villainous characters and placing them in romantic stories, but I LOVE IT!! The concept is brilliant and I love how on the edge it made me, as a reader, want to keep reading, but Dare seriously makes you stop and wonder what’s going on in his head, because he’s possessive AF and his notions of love are very real to him, but very outside of the norm of society.

Aubrey, once she honed in on Dare’s lack of a social compass, had to make a decision on if her love for him was worth her own moral weight. A good girl who wants to lives with her dark Prince, but is she willing to give up what society calls normal rules.

Dare is, I’ll say, in a relationship with another girl, although she is more of a sociopath, which is what gives this book the Cruel Intentions vibe. Anae gives Dare a task to make Aubrey fall in love with him, but that task involves a lot more than just that. Dare being the psycho he is, finds Aubrey fascinating. Like any serial killer I suppose, he becomes obsessed, but I’ll just leave the rest of his villainous traits for you to discover because Dare is a thrill to read and needs to be enjoyed.

Aubrey, if nothing else, I would have liked her to have a bit more backbone, but knowing Dare’s character, her nativity and sunshiny personality is what draws him in and keeps him interested. So, while personally I would have enjoyed for her to open her eyes to his dark and devilish ways, in the end they probably wouldn’t have worked if she wasn’t who she was.

Even If It Hurts is a mental thrill ride. I really never knew what Dare or Anae was going to do which made it exciting and page turning to read.

Villains aren’t supposed to win, and good should always conquer evil, but in the elite coastal town I live in, the only purpose a label has is letting you know what something—or someone—costs. Good, bad; it’s all relative, and it hardly matters. Baymont, California is a land of beautiful villains and happy-ever-afters that are just out of reach.

Until Dare moves the world beneath my feet, and even though I’m afraid to trust it—to trust him—boy, am I tempted.
In more ways than one.
Being with Dare is scary, but being without him is impossible.
He makes it impossible.

Dare’s no hero, that much is clear, but maybe…
Maybe he’s mine.

This story contains triggers and is intended only for a mature, adult audience. See the opening author’s note for more explicit triggers, but know this is a very dangerous relationship with a very dark hero.

The Golden Boy and I are well acquainted. In prep school he trampled on my heart then kept right on going.

Now, he’s living the high life with frat parties and puck bunnies at Hawthorne University. On the other hand, people barely notice me—unless I’m on stage taking my clothes off. I’m the nobody, surviving in the seedy part of town as I fight to keep my head above treacherous waters.

I’ve snubbed him for three years.

The avoidance game we’ve been playing was working—until he rescues me from a bad guy and claims he wants to help me more.

Hello. I don’t need a knight in shining armor. This girl saves herself.

Yet, I’m not sure how long I can ignore the undeniable spark between us. (It’s not even a spark; it’s a full-fledged, blazing fire.)

Can this hockey player prove he’s boyfriend material, or will our past get in the way?

This steamy romance is perfect for fans of enemies-to-lovers or second-chances. Boyfriend Material is a new adult college romance.

Keep reading for a look inside Boyfriend Material!

Eric’s large frame and rugged handsomeness takes the air from my lungs. His hair is pulled back in a man-bun, my fav look on him.
No. I do not have a favorite look for him, but it does show off his ridiculous cheekbones and aristocratic, slightly bent nose.
He’s wearing jeans, gold Converse, and a HU shirt. The lion on the front seems to glare at me—much like he is now.
I lean against the doorjamb. Be cool, be cool. “Howdy, partner.”
He doesn’t smile. “That guy at the laundromat is scary. Stay away from him. I mean it.”
I huff. The nerve of him to tell me what to do.
“That’s what I told you. I repeat, you could have been hurt. Let me handle Connor.”
His arms cross. “How did you get involved with him? Are you on drugs?”
I tuck my hands in my pockets and dip my head so he can’t see how much his words hurt. I know I strip, no one has to remind me, but in prep school, I was the goody-two shoes who never wavered. I had to keep my grades up to keep my scholarship—not that I was ever invited to parties. I wrote poetry. I drew. I daydreamed about him. “Do I look like an addict?”
His golden eyes roam over me. Assessing. “Maybe.”
My throat tingles with words I want to say but know I shouldn’t.
The less he knows, the better.
His nose flares. “I’m trying to help you and you’re giving me the cold shoulder. What’s wrong with you?”
I swallow thickly as I gaze at him. “Eric. Please. Being around me will only smear your good name—”
“Stop,” he calls out, then rubs his face, his anger seeming to deflate like a popped tire. “Don’t put yourself down like that. You’re a person, Julia. One that people care about.”
And I want to protect those people.
I chew on my bottom lip. “You shouldn’t have interfered.”
He lets out a long sigh, gives me a searching look, goes to leave, then stops. He reaches into his pocket and holds something up. “This is yours, I assume.”
I stare at the ring, my lips parting. “How did you . . .?”
But he’s already out the door.

Eight of her eleven novels have placed in the Amazon Top 10 Best-seller List: Dirty English #1; Fake Fiancée and I Dare You #2; I Bet You, Filthy English, and Very Bad Things #6; Boyfriend Bargain #8; The Last Guy, her collaboration with Tia Louise, #4.

A former high school English teacher, she adores all things Pride and Prejudice, and of course, Mr. Darcy is her ultimate hero.

Willa Jade has revealed the cover
and blurb for Judgment! 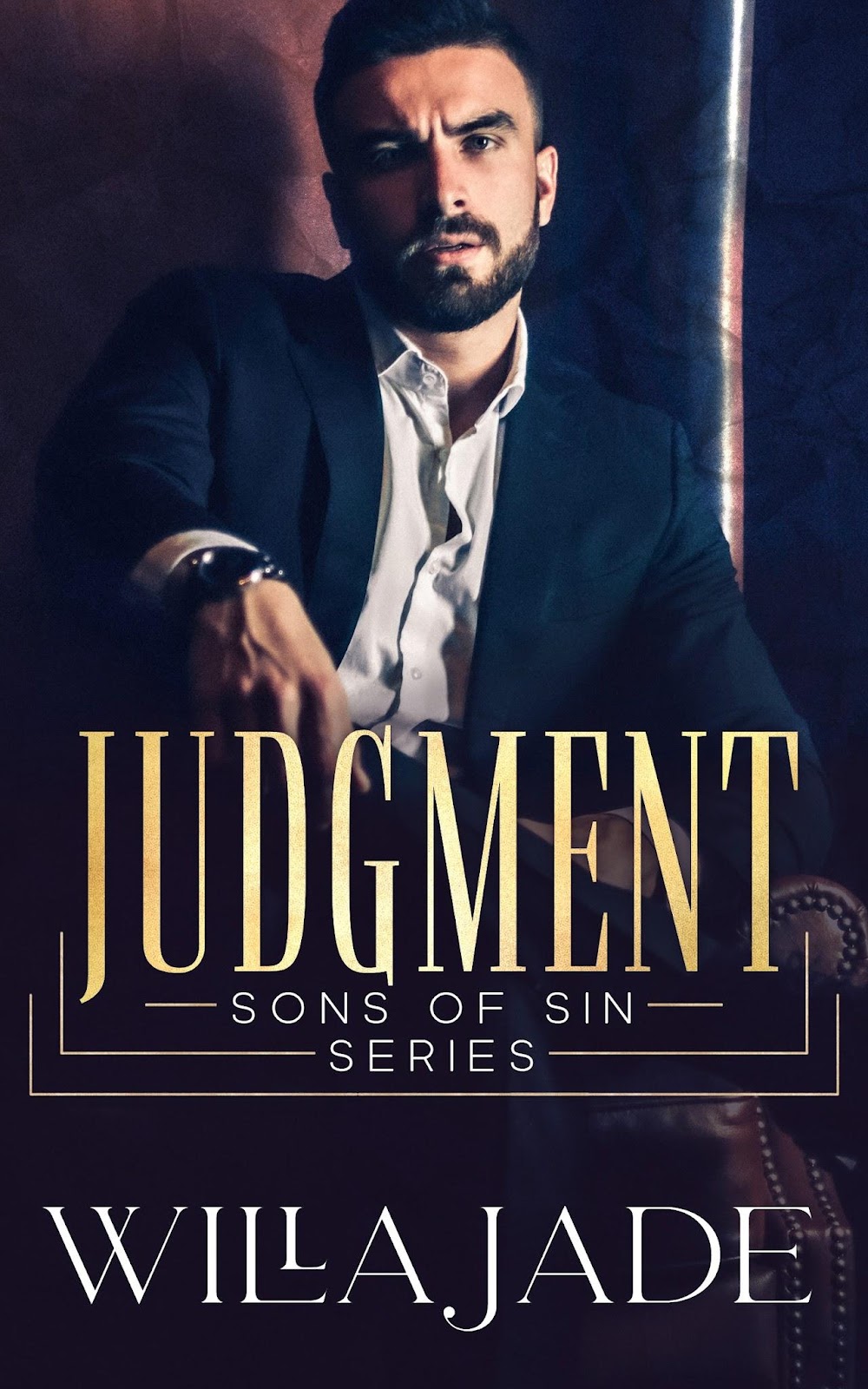 Andre Valinov owns a piece of me.
A piece he refuses to take.
But a deal’s a deal. One I intend to honor.
Even if I made it with the devil.

I thought I was being smart.
Thought I could play a game I’d been watching my whole life.
I was wrong.
Andre is not the kind of man I expected to be taking me home.
I’m nothing more than a pawn to him. A way to prove he holds New York City’s underworld in the palm of his hand.
His power is immense. His control unyielding.
Everything he wants becomes his.

But someone is out to take it all away from him.
The power.
The control.
And me. 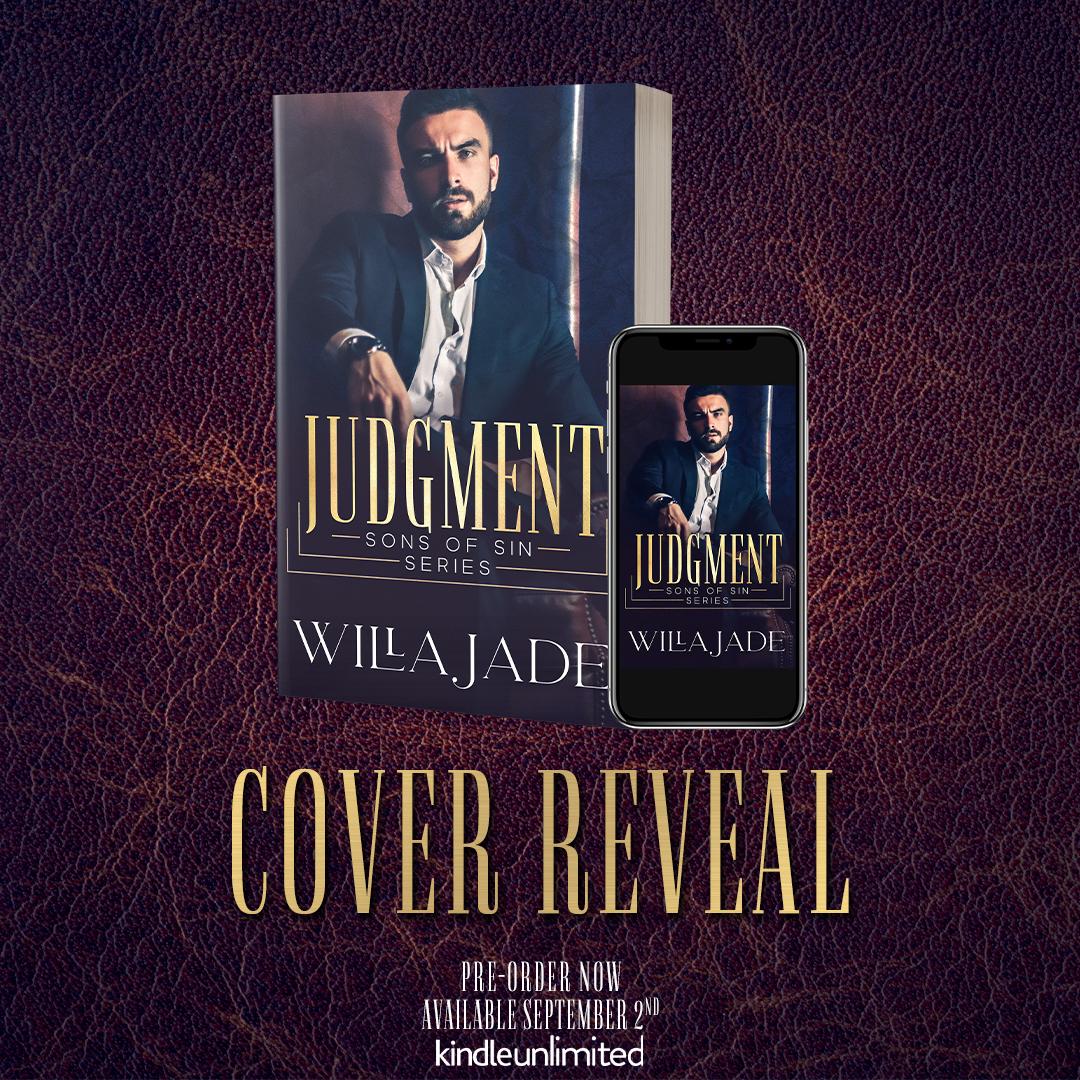 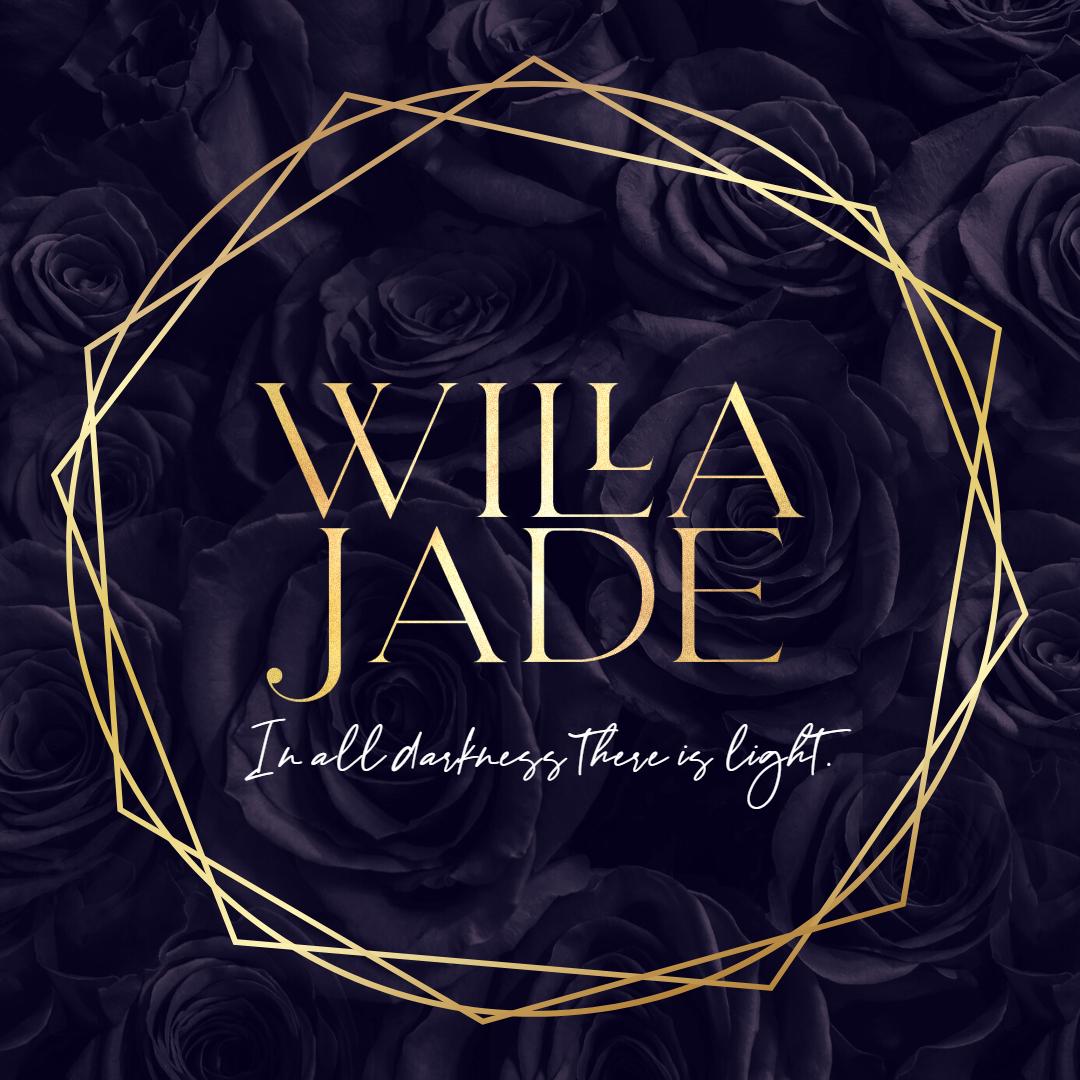 Willa Jade writes steamy contemporary romance that will make you rethink your taste in men and question your moral compass. She loves dark and dangerous heroes that will burn the world down to protect the love they never expected would be theirs. 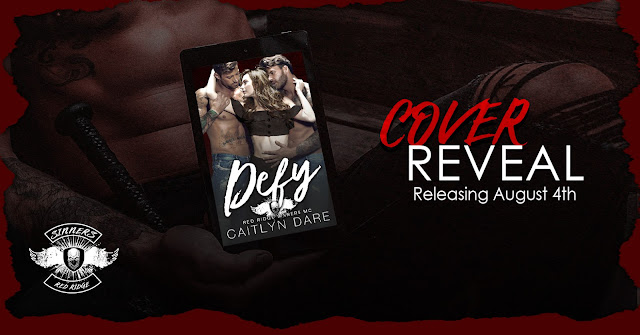 A new MFM dark romance from the bestselling author of the Savage Falls MC series. 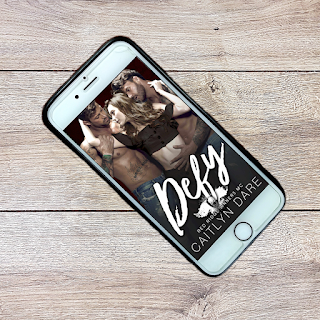 I always knew that once we caved to our desire that it would change everything.
He’s forbidden.
My brother’s ex-best friend.
And his masked accomplice is still a mystery to me.
But while I might try to do the right thing, they seem to have other ideas.
And as has already been proven, my restraint is only so good around them.
Defy is a dark MFM story set within our Red Ridge Sinners MC series. 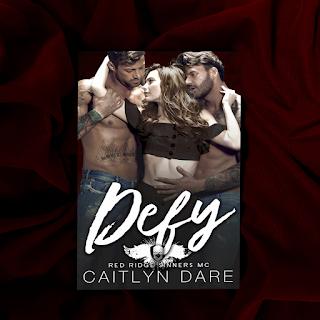