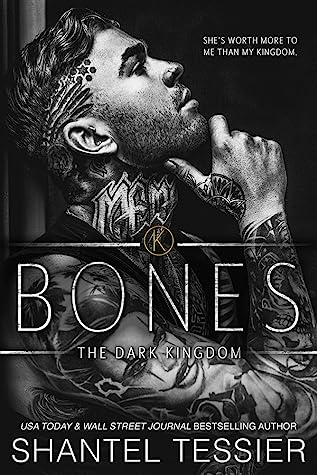 Review:
Dillon Bones Reed is a force to be reckoned with and Mia Bianchi is the one woman who can bring him to his knees.

Bones seems tired, with the Kings empire and all of his side hustles, he really needs a queen by his side. I was ready for his book and the prefect woman who would be strong enough to handle this mysterious King. His kink, his strength, his presence, he needed the perfect woman and Mia did not disappoint.

From an early age, Bones is told – love makes a man weak – while he didn’t necessarily understand what that meant when he’s a young boy, as he gets older the concept solidified as he watches each of his brothers fall for their queen. While he would lay down his life for the men who have stood by his side, he never found a woman that he could say the same, until Mia. She brings out every instinct in him that terrifies him. Things he’s never felt and the worst part of it all is that she’s forbidden, untouchable, and his best friends little sister.

Mia has never felt loved. A prisoner in her own home, she’s only ever wanted a normal life, but taken, sold, and then bought by a lunatic her life seems even more doomed until she slowly begins to fall for her captor and discover that in place of his black heart beats a wild passionate man. Mia discovers a new family in the Kings and their Queens and perhaps a new future with Dillon if he’d only open up and allow himself to love.

There were moments in this book that completely wrecked me, but love proves that it doesn’t make a man weak, it only strengthens the bonds we hold dear.

Synopsis:
BONES
I got my name from breaking the bones of a kid who picked on my younger brother, but that’s only where it started.
My black heart craves violence, and being a King gives me plenty of opportunities.

When a friend comes to me for help because someone he loves is in danger, I’m happy to do so. After all, my friends are few, and they are my family.

Once I have her, I do what I have to in order to protect her. She thinks she’s in hell, but this is child’s play compared to what she would have faced.

She’s an innocent through and through and completely off-limits. But that’s not enough to stop me from doing what I do best—taking what’s mine.

MIA
I was born into a deadly Mafia family, yet I’m a nobody. To the world, I don’t exist.

Shuffled from Vegas as a child and sent to Italy for my protection, I became invisible. Until they found a use for me. Now I’m a card my father can play. A chance to cash in on the family name to the highest bidder.

Taken from my home, I’m sold to a King. His hard blue eyes take no prisoners. He’s just another pretty face to hide the evil and in no way my savior.

Now I know what hell looks like because I’m living it. But just when I think I can finally be free, it all comes crashing down, and the King I thought would end me is the only one who can save me.

All I wanted was to be somebody, but now I wish I’d stayed the nobody.

BONES is the fifth book in The Dark Kingdom Series and can be read as a standalone. Due to mature content and themes this book is recommended for readers aged eighteen and over. This novel may contain triggers. 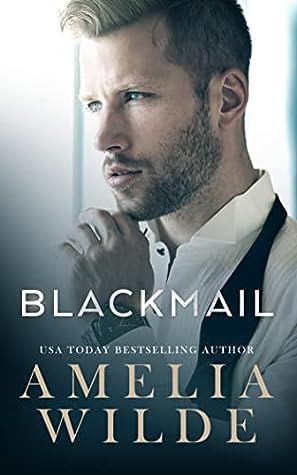 Blackmail; Controlling Interest #1
(#1 within a trilogy)

Review:
Dirty, flirty, emotional, and a grumpy alpha-hole that revs Blackmail into the delicious zone!

Will LeBlanc is a money man. He’s all about figures and not entirely tuned into human emotions. He’s the baby brother in the LeBlanc family, if you read The Collector series, and this is Will’s story.

Will is great at making money, he’s not so great at keeping secretaries. He let’s them goes for the slightest infraction, but when Bristol Anderson walks in on her first day, flawless and with a citrusy scent that lingers after she leaves his office, he’s instantly intrigued. He’s a man who’s never intrigued so when she embezzles fifty thousand dollars from his company and he doesn’t immediately call the police even he’s shocked. Will finds himself in a unique situation, one that works in his favor, a place for blackmail.

Bristol is barely scraping by. Working as a temp, going from job to job and taking care of her twin siblings is exhausting. When her deadbeat dad brings additional trouble to their doorstep in the sum of fifty thousand dollars she’s up against a wall…or she will be when her boss finds out what she’s done. Bristol never imagined when she got caught embezzling from her job that repayment would be in the form of her body and potentially her heart.

The intense moments between Mr. LeBlanc and Ms. Anderson…whew…spicy! Blackmail is juicy and witty and just revving up as this is the first book in a new trilogy. 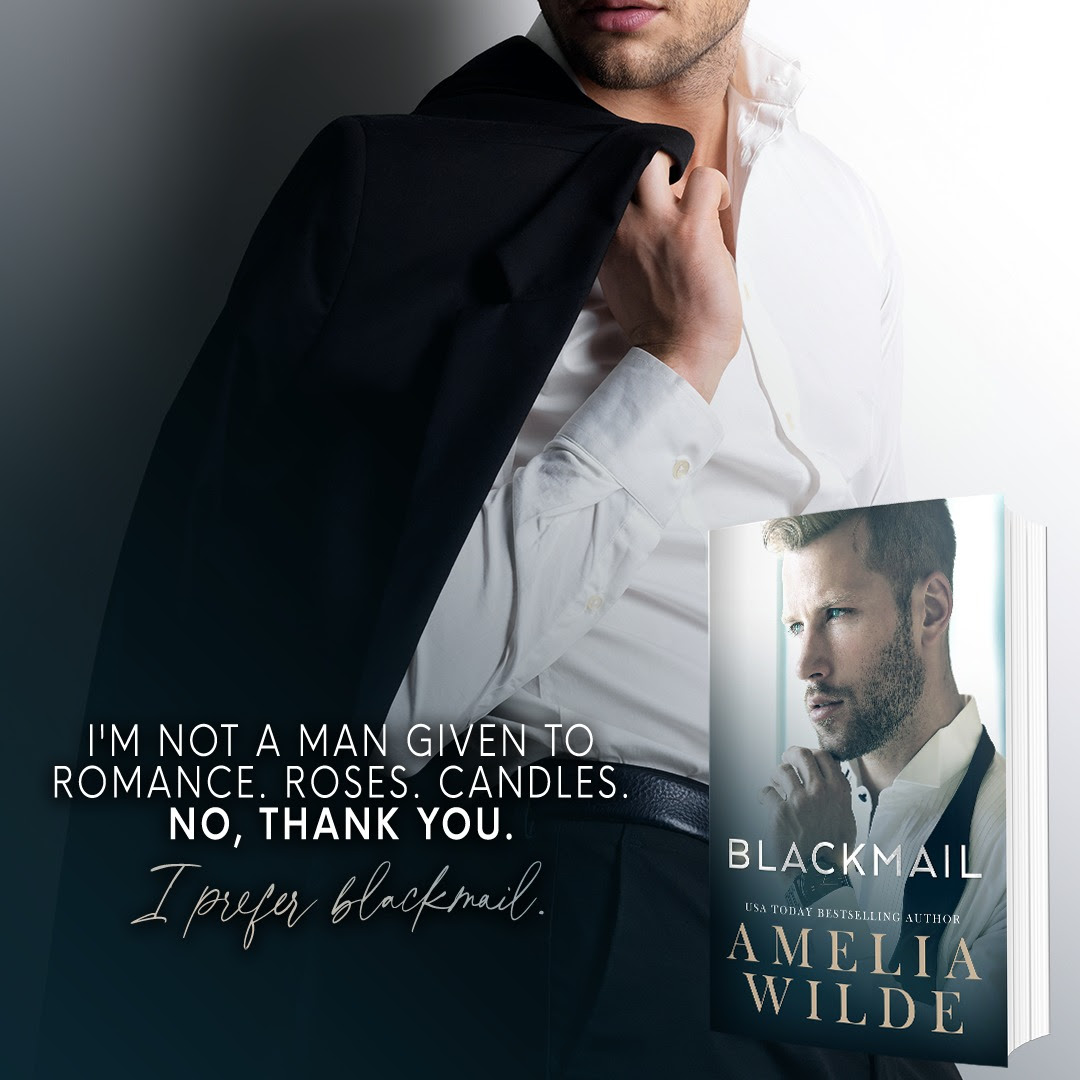 Synopsis:
Bristol Anderson will do anything to protect her younger siblings. Even if it means embezzling from the company where she’s a temp. No one will find out. And the wealthy owner of the venture capitalist firm will never notice.

Except Will LeBlanc doesn’t miss a thing.

He could call the police, but he has more interesting plans for her. In the copy room. On the conference table. Under his desk.

The coldhearted capitalist will make her pay back every last cent.

A STANDALONE full length novel in the multi-author series called Blurred Lines. Echo Adler hates Reign Davidson. He’s the reason the love of her life left her all alone and broken hearted two years ago.  So it should be easy to stay away.  It should be easy to not dream about his dark and mean eyes, or his cruel but sexy smirks. It should be easy to not think about the guy who ruined her happily ever after.  Only it’s not. Sometimes his intense stares make her heart race, and those smirks of his make her breathless.  But it needs to stop.  Because she has a mission: to get back together with her ex-boyfriend. And Echo will be damned if she keeps dreaming about Reign.  The guy who not only makes her sick with hate but who also happens to be her ex’s best friend. 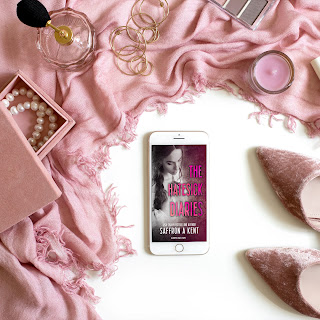 To learn more about Saffron and her books, visit here!

Omegas are supposed to remain virgins until they’re mated off to a pack. Violet, however, is anything but…

As an omega, I was born with one purpose: to be bred by a pack.

The issue? My first heat hit early. Confused and afraid, I took a big risk to relieve the pain, but it broke all the rules and cost me a piece of myself.

Nobody wants a used omega, but if I don’t mate a pack, none of my sisters will be able to either.
So when a wealthy pack of strangers puts in an offer for me, my family is quick to send me packing, all the way to the land of the midnight sun. Alaska.

Archer, Miles, Noah, and Ben are everything that should make my heart flutter. They’re kind, attentive, and they worship me like a goddess.

My body is built for them, to crave their knots and give them offspring. They say they want to give me everything… but what if I have nothing left to give?

Get ready to meet the Steele sisters in the Bonds of Steele omegaverse series world. Each book is a standalone and can be read in any order. Secrets & Seduction features sweet, protective men, a shy, reluctant female lead, and smoldering-hot knotty times. Please read the author’s note for possible triggers.

SK Reign believes in true love and great sex, strong women and irresistible heroes, gripping action and tender sweetness. Why choose one when you can have it all? Indulge in your wildest fantasies with this reverse harem romance that will leave you deliciously satisfied while also begging for more, more… more.