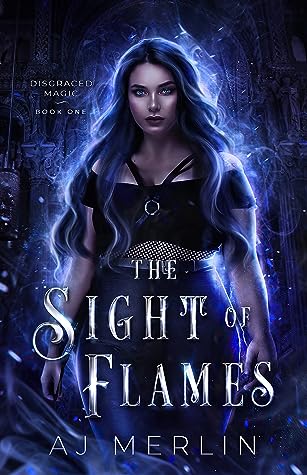 The Sight of Flames; Disgraced Magic #1
(#1 within a series)

Arsena, or Sen, as she prefered to be called by her friends, had the weight of her ancestors on her shoulders ever since her birth. Not only does she look just like her great, so many greats ancestor, but she also possessed her magic. Suffice to say with both of those attributes people tended to give her a wide berth, but when it was time to attend Citadel, sort of like a school for witches, Arsena knew she wouldn’t have the best of times, but she pulled up her big girl britches and kicked butt time and again.

Arsena was nothing short of amazing. Her spirit for not putting up for any crap and standing up for the little guy was comending. She herself was put into the category of lesser than, but she refused to stay there, even when she knew her heritage made it harder for her. The friends she made, which became extremely important to her in the long run, which I won’t give away, because a lot of the story is who gathers around her and it’s sooooooo good and angsty, but I adored those that chose to stay by her side.

The fantasy part of this story had great twists. Not only are the witches gifted with fantastic powers, but their basic, earth, wind, fire and water powers are wrapped up in so much more. Those skills made the book exciting, adventuresome and even a little nerve wracking at times. I won’t give away what those powers were, but wow!!! It made for great reading.

This is only the first book in the series and it does end on a cliffhanger just as the story was really taking off. I can’t wait to jump back in and see where they all go and how everyone gets along.

Synopsis:
Four hundred years ago, my ancestor led an uprising against the Witch’s Council.

Now her descendants and those of her supporters must serve as Wardens to help protect witch-kind, though we’re relegated to being second best and the first ones thrown into danger. The Disgraced, as we’re called, are meant to suck it up and be grateful.

But there’s too much of my ancestor in me to bow to any witch, no matter that I’m Disgraced and an omega. When I enroll in war college to learn to do my duty as a Disgraced Warden and witch omega, I have a feeling that I’m not going to be very popular with my superiors. Let alone any other alphas that cross my path.

To make things worse for everyone an old enemy has returned to hunt us, and whispers of unrest are circulating like the witch plague.

I may be Disgraced, an omega, and the last of my line, but I’m not going to just roll over and accept my fate. Not for the council, a coven, or anyone else.

The Sight of Flames is the first in the Disgraced Magic series. It’s a witchy omegaverse RH/poly romance where the main character and her coven never have to choose.

2 thoughts on “Review – The Sight of Flames by AJ Merlin”