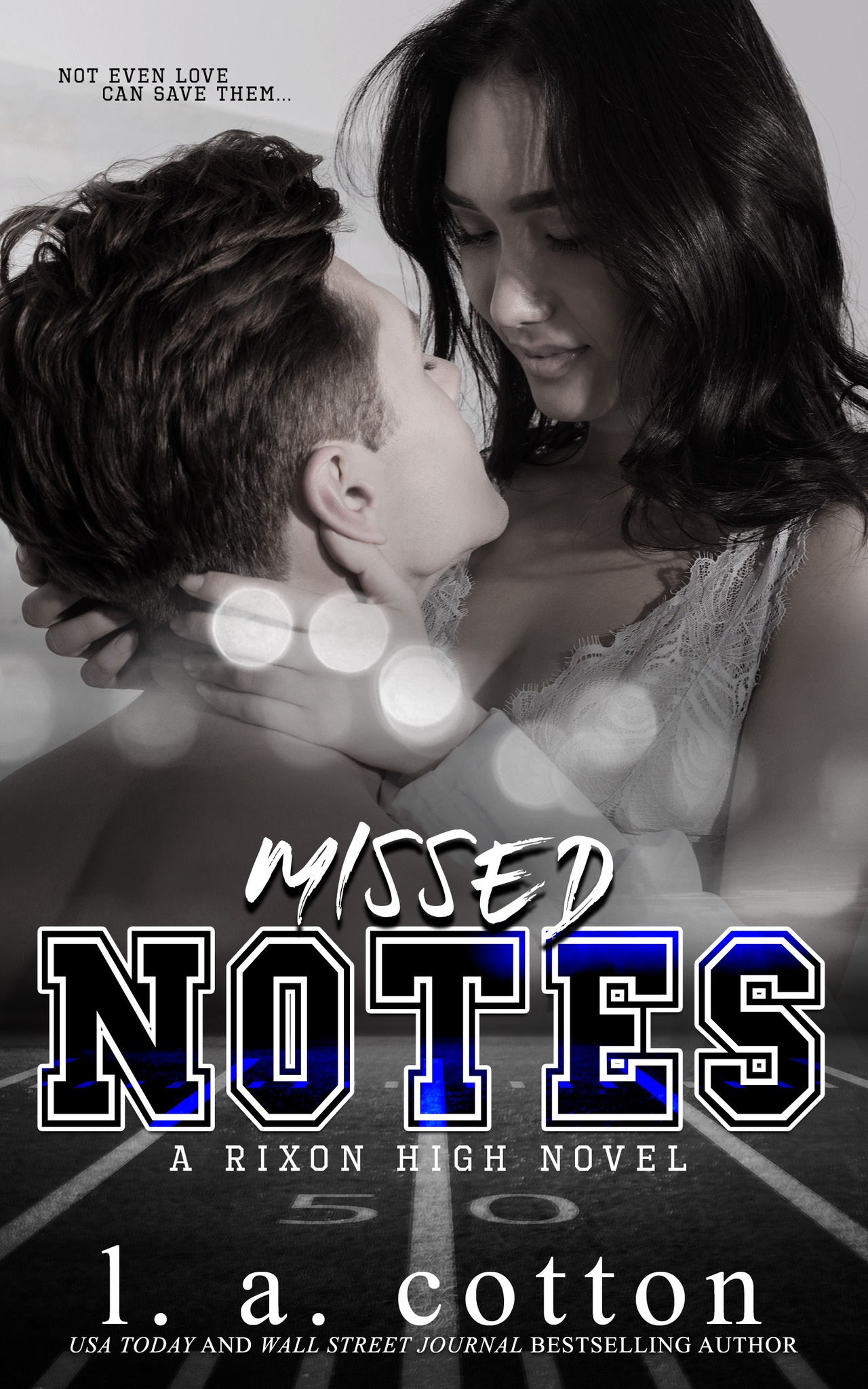 We can all admit that teenage hormones amplify everything to the extreme, add in something that will alter the course of your life and it becomes an overload to any teenage system.

It’s probably why I love reading new adult books so much, the emotions are heightened, the actions are amplified, and everything is just bigger.

Cole and Sofia are thrown into a situation that very few teens have to face and given Sofe’s battle, it’s one that the author tackled with grace and a bucketload of tears.

Both Cole and Sofia have had a crush on one another for quite some time, but neither told the other nor reciprocated, due to one big obstacle…Aaron Bennet. He is Cole’s best friend and Sofe’s twin brother. He’s always been wedged between them and neither knew how to get around the big guy, but when things finally start happening in Sofia’s life that make it nearly impossible for Cole to look the other way they decide it was time for both of them to tell Aaron about their feelings and begin living their truth.

Without giving away the experience, I’m just going to say this; Cole is probably one if the best boyfriends in this series. Prepare to fall hard, but know that this story is also heartbreaking, not because of dumb teenage mistakes, or misspoken words, it’s on a totally different level when it came to pulling on my heartstrings. Family plays a big part in the book, not that they haven’t before, but I love how close these kids are to their parents and how the original Raiders have stayed close to make it one big family as the years have gone by.

This book will require lots of tissues so be prepared and stock up. I could have used wipers for my eyeballs so I could continue reading through the tears.

Missed Notes has one of the most emotional storylines, but the book was well worth it.

Sofia Bennet has always imagined a bright future ahead of her.
But sometimes, life has other plans, and suddenly, you’re walking a different path.

Cole Kandon has always sacrificed his dreams for others.
But sometimes, you have to go after them, consequences be damned.

While Cole is finally ready to fight for what he wants, Sofia is coming to terms with a revelation that changes everything.

He wants to be there for her.
She doesn’t want to burden him.
But they need each other more than they realize.

Senior year just got a whole lot more complicated, and with emotions running high, is their new relationship enough to save them?

Or will their love song fade out before it hits the final note? 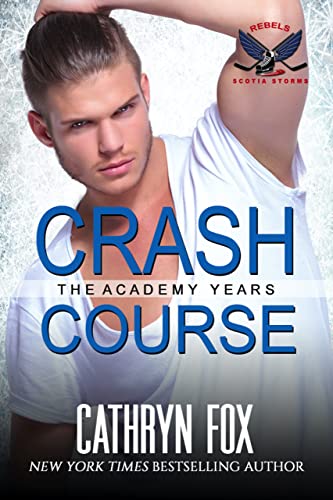 I love reading characters who are so similar when it comes to morals they are practically the same person, but when it comes to what society deems as important, like financial or social standing, you are judged on a very different scale. Let me explain…

Piper and Beckett come from very different backgrounds. She would be considered a spoiled princess, raised with any and everything she could ever want, except for having her parents actual love and affection. As an only child to millionaires she literally can have what she wants, but it’s a lonely life when your parents are running a business and have no time left for you.

Now, Beckett’s family is blue collar, large, but full of so much love he knows no matter what he will always have them to fall back on. His siblings, grandparents, parents, they all live close by and even with his dreams of making it to the NHL, he wants to take care of his family so they won’t have to work as hard since they did so much to help him get where he is. He has a huge heart, oh and a side note, he’s also great with kids…pile of mush and be still my heart.

Even though they were raised in very different environments, they actually are very hard workers, care deeply about their families, and are loyal to those they care about. They just haven’t cared about each other for a very long time and it all comes down to a big misunderstanding, oh and add in the fact that Beckett is a family kind of guy and Piper…well, she’s not.

These two enemies to lovers eventually learn to coexist and when they discover that their old friendship hasn’t withered away, but instead formed into a new passion…well, I’ll just say, those days of the week panties make an appearance. I know I just won’t let it go will I?

Their story is sweet and insanely spicy. It certainly inspired me to look up new undergarments is all I’m saying. I have loved this entire series and how each book is different, but set in the same world. I can’t get enough of Fox’s books.

Everyone loves the team’s biggest player – everyone but me.

We might have grown up in the same small Cape Breton town, but we’re different people from different worlds.

Which makes me wonder why our friends asked us to babysit during summer break.

The forced proximity proves to be hard on my head…and my traitorous body.

But the last thing I want is to get involved with the guy who blatantly ignored me growing up.

Except he’s not ignoring me anymore.

Nope, not ignoring me at all.

Instead, he’s showering me with kisses and touches and OMG, things are so damn good, I forget why we hate each other.

Until summer comes to a close and our past catches up to us, reminding me why we can never ever be anything more than enemies.

From USA Today Bestselling author Holly Renee, comes A Kingdom of Blood and Betrayal, book 2 in the Stars and Shadows Series releasing on November 3rd, 2022!

My fate is bonded to two princes– one born of blood, the other of power— but my trust lies in neither.

My skin is cursed by the stars, my fate damned by desire.

But when the dark prince offers me a bargain that will save his people and my life, the cruel and intoxicating male gives me no choice.

Our union is his revenge, and I am his sacrifice.

His lies are unforgivable. His wicked touch still bathes me in sin.

He is my mate, and he is tortured by a curse to protect his people from his own family.

I could now see him for exactly who he was. So why can’t I get his alluring touch out of my head?

I am the key to saving his kingdom, but he alone has the power to ruin me.

Add to your TBR:

Need to catch up with A Kingdom of Stars and Shadows:

About Holly
I’m Holly Renee, a small-town east Tennessee girl who is obsessed with all things romance. I love bringing flawed, sassy, and real characters to life in a way that makes you feel like you’ve been best friends with them for years. No two Holly Renee books are the same, but if you love real, relatable, fun female characters and swoon-worthy heroes, I’m your girl.

When I’m not writing or reading, you can find me momming so hard, being disgustingly in love with my husband, or chilling in the middle of a lake with my sunglasses and a float. #lakelife

I have a 2-year-old adorable little man who is as wild and sweet as they come and a baby girl on the way.

Release Date: August 17
He thinks he can make me quit…I think I can drive him crazy. We’ve got 8 weeks to find out who’s right… When it comes to sexy oil baron Grant Kingsley, you can leave out the drilling jokes—I’ve heard them all before.
The question is, how did I, mayor of a tiny island on the Forgotten Coast of Florida, end up working directly under him? And why does my mind go to the most inappropriate places every time I ask myself that question?
And what would he look like without that custom-tailored wool suit and expression of insufferable arrogance?
Doesn’t matter. After vanishing from my life when I needed him most, he’s swooped into town with plans to turn our little slice of paradise into an ecological disaster. And he’s forcing me to help pave this highway to Hades—well, he thinks he is. I’m here to block him by any means necessary, and as he’s about to find out, I fight dirty.
So dirty. Just like my thoughts about Grant Kingsley. In fact—
Wait, where were we again?
Oh yes. All I have to do for the next eight weeks is 1.) Resist the charms of a delightful family of eco-villains, 2.) Hide an earth-shattering secret, and 3.) Try not to fall in love – again – with my greatest nemesis.
That last one may be the toughest assignment of them all. 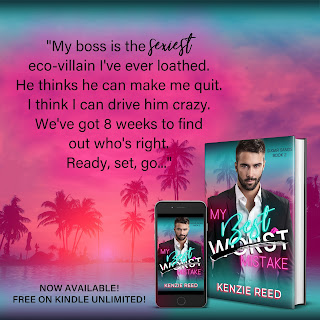 Kenzie Reed lives in beautiful New England and is addicted to happily ever afters.

She has a black belt in sarcasm and makes the worst puns ever—just ask her kids. She spends her days clearing dog fur from her keyboard and dreaming up snarky dialogue for sexy heroes.

Her taste in books ranges from science fiction to thrillers to romantic comedy, and her bookcases have multiple personality disorder.

She loves to hear from readers!