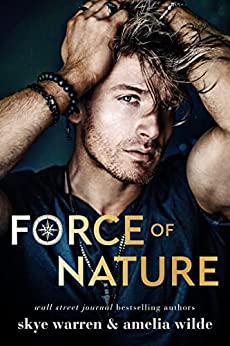 Force of Nature; Deserted Island #1
(#1 within a series)

Review:
The first part of this book contains the prequel, The Crash, so if you missed it, don’t worry, but if you’ve already read it you can jump right into the action and begin reading Force of Nature.

Never once does this book let off the gas. Carter and June are fighting to stay alive throughout the entire story and that fight is not only from human targets, but from the jungle itself. Carter Morelli may be a genius professor in biology, but there is vegetation even he is not aware of and just like people, not all plants are good.

While the mystery man of the island is introduced, he is still a bit of a mystery and we are left on an intense cliffhanger, so I do not want to give away anything that could be misleading.

Jane Porter is sweet, but has a tougher background than she initially portrays. Her fighting spirit is going to go far in this unforgiving environment.

Carter Morelli is so different than he’s come across in other Midnight Dynasty books, but that is also the cover he likes to portray. I, for one, love the intrigue of his background and the intensity he brings.

Force of Nature is fast, intense, and still insanely hot. There is so much more story to tell for each of these characters and I am so here for it. I can hardly wait for the next part of this series.

Synopsis:
Carter Morelli survived a dark childhood and dangerous missions. But when he emergency lands a small aircraft on the ocean, he faces something worse: having someone depend on him. He has to keep innocent June Porter safe on the deserted island.

Except they aren’t alone here…

A man hides among the broad leaves. He’s almost feral.

There are secrets in his cabin. Desire, too.

Scorching chemistry draws all three of them deeper.

They already survived the plane crash, but will they survive the fall?

Welcome to the Midnight Dynasty world… The warring Morelli and Constantine families have enough bad blood to fill an ocean, and their brand new stories will be told by your favorite dangerous romance authors.

WARNING: This book is intended for readers eighteen years old and over. It contains material that some readers could find disturbing. Enter at your own risk…