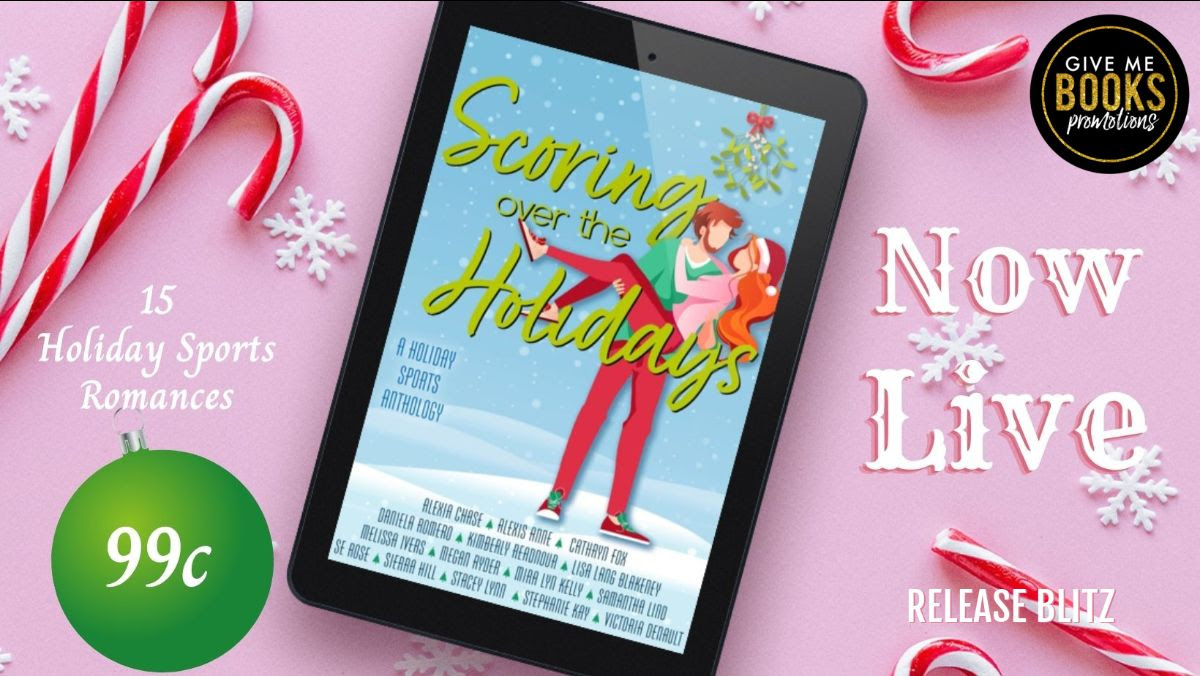 The holiday season is a time for trimming the tree, sipping hot cocoa by a cozy fire, and reading scorching hot romance that will heat up your cold winter nights. From 15 of your favorite sports romance authors come brand new short stories meant to deck your halls and make your season bright.

Stories included in Scoring Over the Holidays:

The Mistletoe by Alexia Chase – Can the awkward girl ever win the hot football player? Saylor dreams of an epic love story of her own, but she’s the awkward girl that’s never been kissed…and as far as she knows, Knox is dating a stunning runway model. After dumping his cheating ex, Knox is ready to settle down and have a happily ever after with someone like Saylor. Will they ever get their signals uncrossed? Maybe a little mistletoe magic can help solve their problems.

Holiday Home Run by Alexis Anne – When center fielder Rhett Ryan and professional cyclist Hope Crawford meet, they both know they’re looking for…something. What, neither of them is sure of, only that they want a repeat. So Hope tempts Rhett with a promise: meet her in the same place on Christmas Eve and he can have her as a present under the tree.

All In by Cathryn Fox – Caleb Stewart is the hottest footballer on the team, a bad boy with a reputation. Peyton Young hates everything about him, especially how he overlooked her in college. Now, eight months later she’s lost the weight, and is determined to show him what he’d missed out on. It’s a solid plan. Until she gets him naked.

Christmas Curveball by Kimberly Readnour – With his life at a crossroad, this Major League Baseball player needs to choose between continuing his dream or face the harsh reality of leaving behind the only thing he’s ever loved—the game. What he doesn’t expect is the curveball fate throws him.

Christmas Curveball is an unrequited love romance based on second chances mixed with Christmas spirit.

Freak: A Holiday Arrangement by Lisa Lang Blakeney – I’m spending holiday break tutoring the guy I’ve had a crush on since freshman year, that is until the hottest ball player at our university shows up instead. Freak Stevenson needs to pass a class in order to graduate and heard I was the best, so we make the wildest holiday arrangement ever. If I help him ace his final, he’ll help me land the guy of my dreams by Christmas. Every moment we spend plotting my target’s seduction is hilarious, until I realize that I’m actually the one who’s being seduced.

Holiday Heat by Megan Ryder – When baseball pitcher and permanent bachelor Alex Rasmussen needs a plus one for a holiday gala, his best friend’s flaky sister-in-law Lucy Monroe is the worst choice ever. Despite her past reputation, Lucy is trying to change her life by not chasing the wrong man, not flaking out, and not flitting from job to job. But as the one night turns into more, will Alex convince her that the heat between them is not just for the holidays?

Jingle Devil: A Holiday Puck by Melissa Ivers – There are two things Coach Weller can’t get enough of this holiday season: white peppermint mochas and his assistant, Tessa Risen. She’s half his age and touching her would land him on the naughty list. But when an office mishap ends with her face in his lap, he’s ready to break all his rules, and do whatever he can to steal her heart. Even if he has to fight dirty.

Dirty Christmas: A Slayers Hockey Holiday by Mira Lyn Kelly – As car-jackings go, I know I lucked out. But still.
Christmas is rough. Now I’m stuck in some tiny twinkle-light town with my plans to avoid the holiday hype blown to *holly* hell. I’m starting to suspect there’s no escaping this lump of coal when a feisty redhead lands in my lap. Suddenly, I know exactly what I want for Christmas.Now I just have to convince her I’m not the naughty player she thinks I am and to give me a chance to score a permanent spot on her nice list.

Holiday Hat Trick by Samantha Lind – Olivia swore she would never date a hockey player, but when she ends up in the locker room to interview Jason, sparks fly! Will they be hot enough to melt the ice and her heart?

A Forward Holiday by S.E. Rose – A famous footballer with a recent injury is sidelined in his small English hometown. He’s been moping around and feeling unmotivated to get himself back on track until he runs into an American woman at a local publ. Will a chance encounter lead to more? Or will these two spend holidays wishing they hadn’t let the other get away?

Holiday Hole in One by Sierra Hill – As the only female exec invited to the leadership golf retreat, two obstacles stand in Everly Banks’s way. Learning to play golf and bringing a fake Plus One to the weekend in the Bahama’s. Can former PGA-player turned golf club pro, Chase Novak, be the hole in one she needs to score the promotion she’s waited for? Or will her fake fiancé show her how much more she deserves?

Final Shot by Stacey Lynn – Lizzie Winston was my best friend for years, but when I told her I wanted more, she ghosted me. It’s been a year since we spoke, but now we’re on a plane together, headed to see our best friends. I have three days to repair our friendship. She doesn’t know I’ve been traded, and I’m leaving Chicago for Las Vegas. This might be our final shot to save what’s left. I might still want everything, but I’ll take whatever she’s willing to give me as long as she’s back in my life.

Mistletoe Misconduct by Stephanie Kay – After being jilted at the altar, Anna is not in a holiday mood, but her friends drag her to the Houston Stampede’s charity bachelor auction, and then they buy her a date with Santa. Hockey player, Nick St. John, AKA Santa, is more of a Grinch, but with a little fun and a sprig or two of mistletoe, will Nick and Anna find their holiday cheer?

Secret Santa Face-Off by Victoria Denault – Pro hockey player Nolan Duggan is a Grinch. Team employee, Felicity Roark, is a relentless little Christmas Elf. When they draw each other’s name in a Secret Santa gift exchange, each is determined to make the other have a change of heart. Their hearts do change, just not in the way they expected.