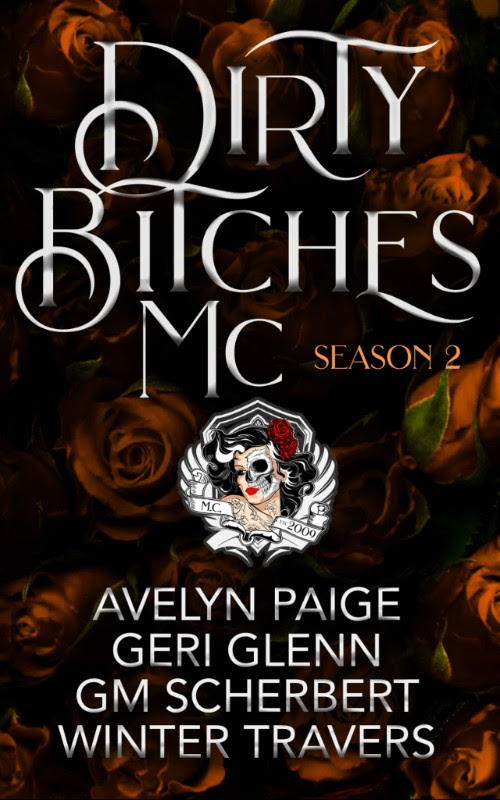 Are you ready for Season 2 of the Dirty Bitches MC?
Pre-order your copy now!

Four lucky readers are prospecting for a place in the Dirty Bitches MC. Magnolia Springs will never be the same again. Written by four Internationally Bestselling Authors, The Dirty Bitches MC is an author/reader experience unlike any before it, where the reader dreams up the story and the author gives it life.

Della Lane’s path in life has always been a dark and treacherous one. After escaping an abusive marriage, she’s found her family in the Dirty Bitches MC, and the freedom she’s been looking for. Her life is finally back on track, until a robbery brings a handsome stranger barreling into her life. One that is now hell bent on protecting her, when her stalker ex-husband decides their divorce isn’t so final after all.

Lay Your Hands On Me – Winter Travers and Nikki Horn

Being Stiletto’s baby sister has never been easy for Kit Bane. She wants nothing more than to be out of her shadow and to prove to both her sister and herself that she is worthy of being one of the Dirty Bitches. But when one man comes crashing into her life, she can’t help but wonder if being a prospect for the DBMC is really what she wants or if life outside of Magnolia Springs is what she actually needs.

Onyx Schmidt is a single mom with a busy life she wouldn’t trade for the world. Between her son, her job and prospecting for a place in The Dirty Bitches MC, Onyx doesn’t have a lot of time to herself. When two broody, muscular men show up on her doorstep, winning over her son, and sending her ovaries into overdrive, Onyx knows life will never be the same again. But can she juggle a new relationship made up of three people when things with both her son and her club are in jeopardy?

’Til We Ain’t Strangers Anymore – GM Scherbert and Liz Preston

The Dirty Bitches MC is a family so different, yet so much more than the one Billie Jo grew up with. Working at Stained Skin and seeing the way the club have each other’s backs, she wants nothing more than to be a part of the sisterhood, even if it does mean Titz is her sponsor. Dubbed Triple D, Billie Jo’s new role as prospect comes just as the man she thought would be her forever slaps her with a truth that shatters her heart and nearly crushes her spirit. But when she is confronted by a second man – one she thought she’d never see again – 3D has to decide … will she be able to get her tattoo and give ‘em too?

Add to your Goodreads TBR ➩ http://bit.ly/2OYgfiD