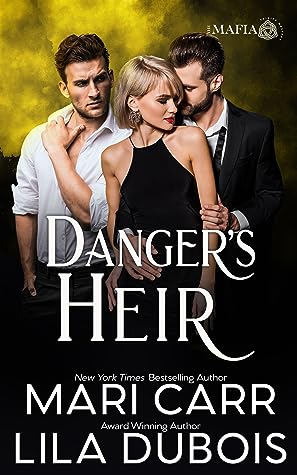 Review:
Great chemistry, and suspense right out of the gate! The physical chemistry, between the ménage, just sparked and then the intense storyline…this was a great story!

Rodrigo was immersed in his father’s world, a world that twisted his gut and repulsed him daily, but he also knew he was the only one to get close enough to eventually shut it down. However, because he was undercover, his contacts on the outside didn’t know if he’d turned and because of that the MA send in Casson to pull him out.

When Casson gets there and he hears Rodrigo’s side he stays, as Casson’s bodyguard, meeting his newly arranged fiancée – Giada, and it didn’t take long for these three to practically light my kindle on fire.

Working together, was heaven, but also torture, because both Casson and Rodrigo were keeping a lot of secrets from one another. While they were all developing feelings and really wished they’d have a happy ending, the only ending was without the woman they both wanted.

A truly exciting and, at times, heartbreaking addition to the Master’s Admiralty series. I loved how spirited Giada was. She never backed down and owned her powerful thinking and determination while living in a male dominated world. A perfect woman for Rodrigo and Casson.

Synopsis:
She fell in love, got married…and it was all a lie.

They expected a mafia princess, but when Rodrigo meets the woman his father is forcing him to marry, he realizes Giada is much more than she seems. Smart and dangerous, she’s the kind of woman he could love…too bad everything he’s about to tell her is a lie.

Casson knows Rodrigo is in too deep. Rodrigo’s undercover mission as the heir to a powerful Camorra don should have ended long ago, but now he’s engaged to the daughter of another dangerous man, and it’s Casson’s job to pull him out.

She’s nothing either man expected, and everything they want. The last thing they expect is for Giada to invite both of them to her bed.

As the wedding day looms closer, and enemies close in, the line between what’s real and what’s a lie becomes blurred, and Rodrigo and Casson have to decide if love is enough. And if they should tell her the truth.

Unfortunately, there’s someone else waiting in the wings to make sure they never say “I do.”