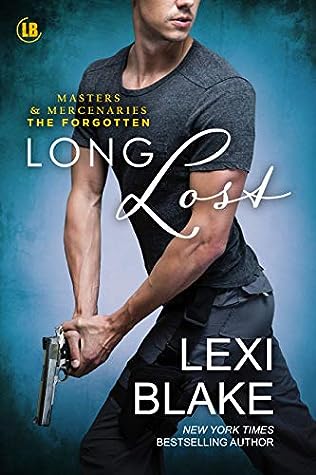 Long Lost; Masters and Mercenaries, The Forgotten #4
(#4 within a series)

The best Lexi Blake book yet!! Funny, suspenseful, scintillating and full of intrigue. This captivating tale is winding up to a cataclysmic end that will run you through the emotional wringer.

Long Lost is brilliantly written. All of the Lost Boys (well, those that are still breathing) are together and the dynamic between these men is off the charts! Male bonding at its best with Ian Taggart in the mix to instill lots of wit and wisdom which brings the McKay-Taggart sense of home and that sense of joy to my soul making Lexi Blake a one-click author for me.

While Tucker Jones, one of the happier Lost Boys, discovers he was once Dr. Steven Reasor, or the more notoriously known Dr. Razor who worked alongside Hope McDonald during her evil mind altering drug days, as his memories begin to return he isn’t sure he is the now gentle man Tucker or the evil Dr. How does he trust his scrambled brain when it’s been to tampered with? The one person he feels connected to, Roni Croft. He doesn’t know why he trusts her, but something deep down says he does and he will do anything to keep her. Will he always be Tucker or will be Steven? What memories does he trust?

Roni knew the man known as Steven Reasor. He was kind and sweet to her and he doesn’t know it, but they have a daughter together. Her world changed the day he disappeared and she doesn’t know who Tucker is. He looks like Steven, but he’s also different. Can she trust this new version of the man she fell in love with? When things go sideways she needs his team to help. It’s more than just Tucker everyone is after, she may also know more than she ever thought. Can they discover their past together or will time run out before they have a chance at a future together?

Long Lost is soooo bittersweet. One moment you’ll be choked up and the very next you’ll be chuckling at a witty comment. For Lexi fans there are interconnections to her other series which you will love, but it isn’t required for anyone who hasn’t read them.  Also, for fans you will love the electric currents leading up to her next book which is going to be another amazing ride!

The only thing Tucker remembers of his past is pain. Used in a doctor’s evil experiments, his memories and identity were erased, and his freedom taken. He believed his nightmare was over when he was liberated by the men and women of McKay-Taggart, until he heard the name Steven Reasor. The idea that he could have been involved in the terrible experiments that cost his “brothers” everything crushed him. A desperate attempt to force him to remember the truth almost cost him his life. Now his world is in chaos and his only path to finally uncover the truth and atone for his sins leads to Veronica Croft.

Veronica “Roni” Croft knew Dr. Steven Reasor was bad for her, but she also saw a side of the man that no one else knew. Even as she began to believe their employer was hiding something sinister, she was drawn to him like a moth to a flame. Their affair was passionate and intense, but also fraught with danger. When he disappeared under mysterious circumstances, she took her first chance to run and never looked back. She has stayed hidden ever since, running from forces she knows are too powerful to overcome. But now the man she believed was dead, the man she mourned, has returned and needs her help.

As Tucker and Roni unravel the secrets of his past, a dark force rises and threatens to destroy them. Their only chance for survival will require them to join forces with the Lost Boys’ worst enemy. Only together can they finally unlock Tucker’s past. But as Tucker’s memories begin to come back, will it free them both or tear them apart forever?