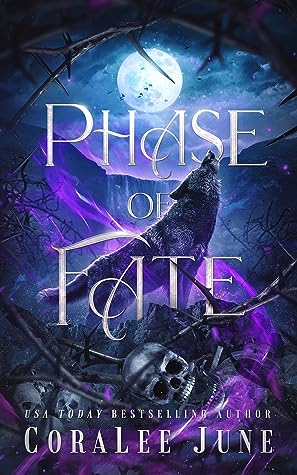 Phase of Fate; Shifter Romance #1
(#1 within a trilogy)

A uniquely stunning beginning to a new paranormal romance by Coralee June. My mind is still swimming with all the emotions and imagery from this epic beginning where I was pulled in from the very beginning and left hanging with my jaw wide open at the very end. This book was so well done it deserves well beyond 5 stars!!!!

Phase of Fate begins in tragedy and is steeped in grief. This is a feeling I’m familiar with and Coralee writes it like she’s a bed partner with it. Halle is barely keeping her head above water after losing her sister and best friend in the most horrific manner, but upon a precipice of change she undergoes a shift that she never wanted and fears at the depth of her soul.

Theo is an Alpha shifter, a budding Alpha, but one who had been training for leading a pack his entire life. When his instinct pulls him towards Halle, he can’t fight it as much as he would want to. His wolf tells him Halle belongs to him, but the defiant girl infuriates him, defies him, and messes with his future which derails all the Alpha plans he ever had. The fates have decided that he can’t ignore her no matter what he originally planned now that Halle is his, but that doesn’t mean he has to like it.

Halle never asked for a guardian, especially an overprotective, growly one that she will never feel comfortable around. However, when her life changes and Theo becomes hers, her life no longer becomes hers in every single way. She needs to find a solution to save herself and save others as well. She won’t see other Prodigy’s suffer the same fate as her sister.

I can hardly describe how much I connected with Halle. Certainly not with having an overbearing shifter stuck to my side, I wish…but with the feelings of always being in the shadow or always being less than. I’m jammed right in the middle of two siblings and was always compared to both my entire life living in both of their shadows. Halle…well, I empathized with her emotions and her grief on a huge level.

Coralee truly infused this book into my thoughts and soul. I was dreaming about the book and couldn’t stop thinking about the characters or plot for days. While this has to be one of the slowest burns I’ve read when it comes to romance, I hardly noticed because it’s brilliantly written and has a totally original plot. I can hardly wait for the rest of the book to arrive more so because I’m addicted to the story vs.the slow moving chemistry. Who knew?!?

Don’t miss this fantastic read, especially if you love paranormal, new adult books. This one is a must read!!

I was the average daughter. The troublemaker. The side character in my sister, Mona’s, story.
My sister was a Prodigy, endowed with exceptional skills and bonded with a guardian. In a world where all leaders, scientists, and artists are selected and pledged to shifters, she was born for greatness.
I was born to live in her shadow.
In a moment of rebellion, I trespassed on pack lands and an alpha guardian shifter, Theo, bonded to me. Tragedy makes me reject the pairing.
They say I am a Prodigy now–someone special.
I think they’re wrong.
Theo is protective, overbearing, and gets under my skin. He knows me better than anyone else. It takes everything I have to keep the wall around my heart built up.
I refuse to ever trust a shifter.
I refuse to fall in love with my rival.
But fate comes in phases.
Once a nobody, now a hero.
Once an enemy, now my forever.

2 thoughts on “Review – Phase of Fate by Coralee June”