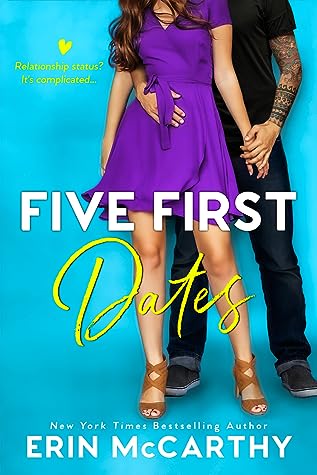 Adorable, smexy, hot tattooed man, and one cooing baby that will melt your heart. First Five Dates has it all! Every ovary bursting moment that I read in one sitting!

Maddox has had a crush on Savannah since he was a teenage boy. He’s best friends with her brother, so it was a bit awkward to ever say much about that crush when he was a gangly teen, but it’s now years later and Savannah is a single mother which only has intensified his crush into a deep lust now that they are adults. Savannah has graciously opened up her home to him, allowing him to stay there while he films for his new job, but Maddox also has a secondary plan to win her over. He plans to finally show her that he is no longer just a skinny boy who is best friends with her brother, he is now a man who wants to take care of her and her son.

Savannah has the worst taste in men. Take being a single mother with a six month old son. When her last relationship ran out when she informed him she was pregnant it only goes to prove that her taste in men haven’t improved in all the years she has dated. When her brothers best friend, Maddox, agreed to move in and help her with her son, Sully she was thankful beyond belief. What she didn’t know was that Maddox is now hot AF. She hadn’t seen in him in person in several years and the tattooed, ripped man who shows up on her doorstep is not the same gangly boy she last saw years ago. Her hormones may not be in charge with him staying under her roof.

Savannah enlists her friends to help her set up blind dates to get back on the dating scene. This begins the first of four dates. When Maddox gets wind of her plan he wants in and becomes the fifth to join in on this plan. While living under Savannah’s roof the two of them not only get to know one another better, but they also “get to know one another better” (wink, wink). Savannah and Maddox have a natural chemistry and everytime they are together it is wicked hot.

Maddox is the absolute best. As a manny he is glorious. He has a natural instinct with Sully which is ovary melting, especially when I imagine him covered in his tattoos. Totally yummy.

A fun, smexy read that is exactly what is needed during this stressful time.

Every perfect rom-com has a twist that leads the heroine to her happily ever after.

Me? Somehow, in any room full of Prince Charmings, I always manage to find the one frog.

So this time, I’ve found my own twist. Four of my friends will each set me up. Four first dates. Four chances at my own happily-ever-after.

My brother’s best friend even offered to watch my baby while I’m out finding true love.

Only Maddox has seriously grown up since I saw him last. The guy next door now looks more like the guy on a magazine cover. He’s inked and sexy. Muscular. Utterly irresistible. And… big. Oh, and did I mention he’s now my roommate?