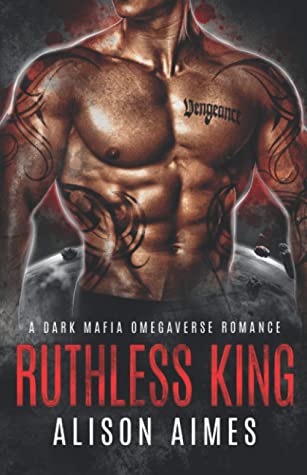 Ruthless King; Ruthless Warlords #1
(A standalone within a series)

Everything about this book is amazing, especially if you are a sci-fi, fantasy fan who loves their males to be alpha and their stories to have lots of heat. I’m already in love with all of the characters and the entire storyline, so Ruthless King is a win-win for me in every possible way.

There is something about sci-fi and fantasy that allows your mind to really let go and your imagination to run free. It’s probably why when this genre is done well I’m such a huge fan of any trope set in this world.

Ruthless King combines this fantasy universe with a mafia trope which gives these Alpha males another suped-up edge to their already testosterone filled brains. I loved how possessive they already were over their families and then once the mating instinct kicked in with their omega, watch out, that possessive gene goes through the roof.

Their universe revolves around lots of aliens and I won’t take the time, nor is it relevant for review purposes to go into Nikolai’s and Dahlia’s specific features, however, it is pertinent to point out their races have common attributes like barbs and fangs, similar to cats, for mating. Why is this relevant?  All inhabitants are either Alpha, beta or omega. Alphas lead, betas serve, and omegas submit. This is the foundation for the very story and built off of this premise is that while Alpha’s are in control, although they seem to have gotten a bit out of control, and the omega’s have been reduced to nothing more than breeders or whores, but we circle back to that.

Dahlia, from the very beginning doesn’t want to be sold into the omega lifestyle, even though she knows that is what she has been preparing for her entire life. She fights her instinct tooth and nail, when it would be so much easier to just give in. It’s a good thing Nikolai likes a woman with a little fight in her, otherwise their union might have gone just a bit differently. However, that fight isn’t there just to be alluring, she seriously doesn’t want to be tossed out like she’s seen so many omega’s after they have been used. Her fears are deeply seeded and Nikolai may never be able to break through them.

Nikolai is called the Ruthless King throughout the universe for a reason, however, when it comes to his omega there is a softer side to the Alpha. Nikolai believes he is twisted and dark, but he’s had to be for a long time to get where he’s at. However, he is never that way with his mate. The unfortunate side though of being called the Ruthless King is having your own omega believe it no matter how he behaves around her. He needs her help and the only way to get it is to have her trust. That may be next to impossible.

Alphas and omegas relationships throughout the universe have not had the best reputations, so why would Dahlia believe anything less than what she knows. Why should she open herself to hurt even when Nikolai promises he would never do such a thing.

Together these two struggle not only in their relationship, but also to solve a mystery that is closing in around them. The story is high heat, high octane adventure, and full of emotional depth. I truly loved the beginning of this series.

This first book has left a door open for more stories with several character potentials. I’m very excited to uncover more about their races and who their love interests could be going forward.

Circling back to where I mentioned Alphas and omegas getting along in their past we get a glimpse into some history that their entire society once had a healthier foundation. I’m dying to know exactly what their past looked like and I feel that Alison has just given us a taste.  This beginning book is juicy on so many levels, but it is like the first bite of a really delicious sandwich with a footlong more to eat. I can feel that Alison has more up her sleeve and I looking forward to devouring that entire sub. 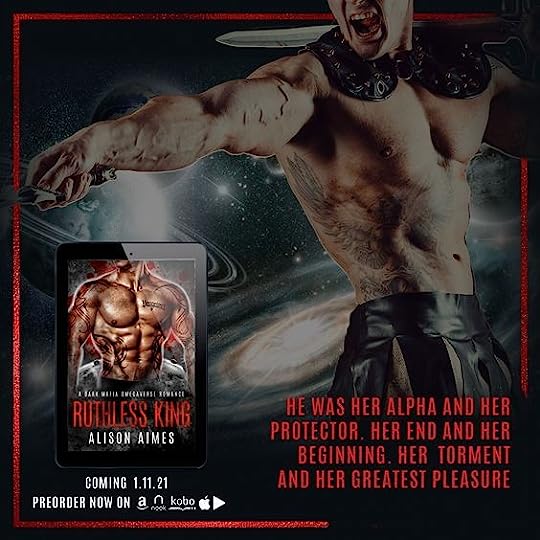 He’s the most brutal Alpha crime boss in the galaxy—and she belongs to him now. Payment for a debt owed. Pawn for an act of vengeance. Property to be used, knotted, and bred.

Irresistibly gorgeous mafia king Nikolai Skolov is dominant, hard, possessive—and determined to bend innocent omega Dahlia Lundin to his will. But she is equally determined to resist. The lives of those she loves depends upon it.

Except Dahlia isn’t prepared for the insatiable hunger the Alpha’s discipline awakens. Or her soul’s recognition that her new master is also her fated-mate.

As dangers mount and betrayals loom, all Dahlia knows is turned on its head. Allegiances are tested. Secrets exposed. Until Dahlia is not sure if her ruthless enemy is the monster who will destroy her or the only one left who can save her…