Forbidden Flame; Ruthless Warlords #1.5
(A novella within a series)

I loved this novella that Alison Aimes added to the Omegaverse! It was barely a taste to whet my appetite, but also just enough to keep me on edge eagerly anticipating her next release. Forbidden Flame brought the heat, tension, and the big, strong Alpha all in this short story.

Alpha Magnus Avitus has been exiled to the Forbidden Sector. It’s a desolate place where trash, unused and discarded items and people are tossed. Magnus went there after he was almost murdered and then falsely accused of murdering his own father. Now he wants justice and revenge. His first real step towards seeking retribution is intercepting a weapon that is on his way to his uncle, the very man who is actually responsible for killing his father. What Magnus doesn’t realize is that by taking this weapon, he is actually changing the projection of his future, but it could cost him the very thing he never knew he wanted…love.

Amora Rose has lived a very lonely life. As an outcast and a freak, she is an unwanted omega, aside from her gift. That is until her gift becomes a burden and she is once again tossed aside and left all alone. When Amora meets Magnus she too warns him she will only bring pain and suffering, but the stubborn Alpha does not listen instead claiming her as his own, something she has never had. Perhaps, living among the other discarded people she too has found her place, if she can get through to Magnus that love is more important than revenge, but do Alphas ever listen?

Forbidden Flame may be a novella, but it still packs all the heat, suspense, and great story that Alison’s longer books do. It’s a great addition to the Omegaverse series! 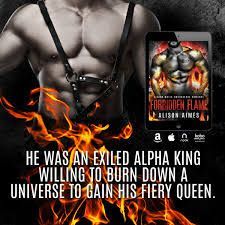 He’s out for revenge. She’s out to escape. Neither intends to fall in love.

His instructions are simple: do not open the bag. To escape exile and enact revenge, crime boss Magnus Avitus agrees to play the part of errand boy. But when the volatile package he’s been tasked with delivering begins to squirm, he has to take a peek. He never expects to come face-to-face with her. Or to have everything inside him roar “mine.”

Her plans are simple: escape the bag and those intent on using her. But when omega Amora Rose’s prison is unpacked before she can free herself, she is claimed by ferocious, scarred warlord who makes her heart whisper “mine.”

Except she has a secret that’s about to send all their simple plans up in flames.

Pre-order your copy of Forbidden Flame by Alison Aimes today!