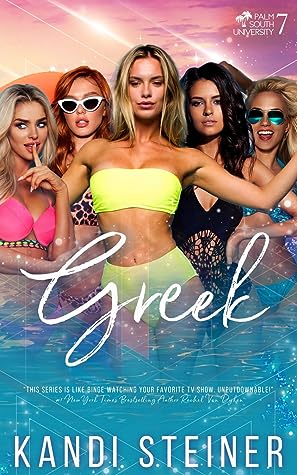 At the beginning of this series; Jess, Erin, Cassie, Ashlei, and Skyler all became greek sisters at PSU and began the journey into a deep friendship and a bond of sisterhood that would lead them into heartbreak, self discovery, relationships that would work, relationships that wouldn’t work, ups and downs, fights, job paths, etc… It all comes down to this final semester when you know real life is right around the corner, will everyone survive?

Jess was left with a choice when the last book ended. She was happily in love with Kade when Jarrett came back into her life. Jarrett was her first love, but her shattered her heart. Kade was the boy who was there when she was at her lowest and made her believe in love again. She has a decision to make over two men, because she does love them both, but she can’t keep them both. I love how this story played out and that Jess took her time to really think about the over all ramifications of her decision. This particular story always pulled at my heart and really tore me up, so I couldn’t be happier.

Bear and Erin had the biggest hurdles to overcome throughout this entire series and I adore them as a couple. I love how they both have grown as individuals and in their relationship together. They make each other stronger and through their support of one another they have blossomed into one of my favorite couples.

Adam and Cassie was one of my favorite couples from the beginning of this series, but this last semester proved to be once again one of their hardest. As Adam was working in another state the long distance was putting a strain on their relationship, would it survive Cassie’s final semester at PSU?

Ashlei suffers a huge setback in her pole class, but the rest of her life is actually pretty amazing. Of all the girls Ashlei kind of has her life together. She has a great job and a great guy…could things get better? They just might for the girl who had a rough start at the beginning of this series.

With this series coming to a close I’m really going to miss them and all the drama. I’m going to wonder what has happened as they’ve aged five or ten years from now. Perhaps there will be a reunion special. One can only hope.

The epic conclusion to the Palm South University Series…

Sisterhood is forever, but can it survive life’s biggest curveballs?

Erin fights for justice while Bear continues to fight his demons in order to be the man he wants to be for the woman he loves. Skyler considers what will come after graduation — and whether or not Kip will be a part of the plan. Cassie and Adam navigate their newfound long distance relationship, and find the path to be bumpier than expected.

Meanwhile, a shocking accident has Ashlei facing the biggest challenges of her life — while Jess has to decide which brother she wants in hers forever.

School is almost over for this university crew, but the drama has just begun.

This series should be read in order for the most enjoyment