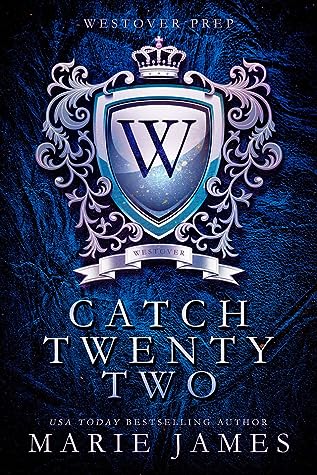 Catch Twenty-Two; Westover Prep #2
(A standalone within a series)

A bully romance that has a great push and pull and up and down of emotions. Catch Twenty-Two has a broken, vulnerable bully that not only broke my heart over and over, but also made me cry for the girl who he was broken up over.

Zeke and Frankie had that magnetic chemistry where they were constantly being pulled together and when the magnets were correctly aligned they couldn’t stay apart, but if the magnets were flipped they definitely pushed each other away.

Zeke was probably the most vulnerable bully I’ve read to date. He was already broken by life, taking on the burden of his family, having lost their ranch and home, and then watching his father deteriorate right before his eyes. Zeke was angry at circumstance, at things he had no control over, and lastly at his own hormones when he finds himself attracted to Frankie when she arrives for the summer to live at the ranch Zeke works at. It doesn’t help that his family keeps telling him that he’ll adore Frankie and they will be great friends and probably more. He was building up to already dislike her before she arrives and his attraction to her just adds fuel to the fire.
Is Zeke spout vile words? Yes. Is he mean? Yes. Does he care about his family? Yes. Does he loathe treating Frankie horribly? Every single time, but he still does it because deep down…well, he has a lot of emotional reasons which I won’t give away here, but he really is just a broken boy.

Frankie went out to Utah for the summer to visit her grandmother and was hoping to escape the bullying she received while living at home. She never thought she would receive it from the beautiful boy working on her grandmother’s ranch, especially since she speaks so highly of him. Zeke turns out to be two different people; a kind, sweet boy in front of everyone else and a vile, mean bully when they are alone. The hot and cold gives her whiplash all summer until she leaves and finally returns back to Westover where she believes she will never have to see him again. Little does she realize that he will be standing in the hallways of Westover Prep on the first day of school. Which Zeke will she be greeted with, the good or the bad?

As much as you might want to hate Zeke, all I wanted to do was give him a hug. His wounds were so fresh and he really did inner-reflect a lot. He carried guilt and self loathing over how he behaved, but he couldn’t stop himself from hurting those around him. The lion with the thorn in his paw that lashed out in anger.

Frankie is also no delicate flower. She holds her own against his mean behavior, which is why he is continually drawn to her and has a hot and cold shoulder as well. She’s grown up with boys very similar to him, but he’s also new in his emotional state.

I adore this couple and really look forward to updates going forward in the Westover Prep world.

He can’t stand anything about her, but can’t keep his hands off of her.

I wasn’t looking for him.
He found me.
With his sexy smirk and irresistible body.
I wanted nothing to do with someone like him.
Judgmental and brooding.
So full of himself.
But now, I’m stuck playing the fool.
Falling for him.
And losing it all.
If only for one night.

Stuffy, rich, entitled.
The kind of girl that gets what she wants.
When she wants it.
And I want nothing to do with her.
Yet, I can’t stay away.
I’m drawn to her kindness and compassion.
Her beauty.
She holds me when the pain won’t subside.
And now, if I can help it, I’m going to hold on to her…
Forever.