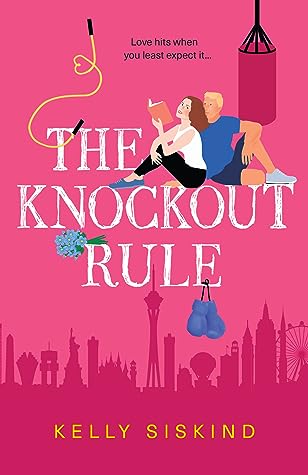 The Knockout Rule; Showmen #4
(A standalone within a series)

A slow burn romance that takes a look at the boxing world and the importance of family.

Eric Kramarovsky, also known as Brick Kramarov which is his boxing personality with a Hulk like tagline of “Brick Smash”. Eric has a brutish public persona to keep up appearances which is completely opposite to his actual high IQ and sweet personality. The persona of “Brick” weighs on Eric though most of the book and also drags on Isla who has trouble with the boxing world to begin with. As they get to know each other more he’d love to walk away, but Eric needs boxing to save his family, which means “Brick” stays and it’s a fine line to a budding relationship. The love Eric has for his family is so sweet and it’s really hard not to like the guy.

Isla grew up with a heavyweight famous father and hates the world of boxing. She watched as the career he loved took away his marriage and slowly took away his health all in the name of his profession. Isla appreciates the dedication it takes to be an athlete, but she will never understand boxing and the men who destroy their bodies. So when her father asks her to help with one of his proteges, Eric,  she really can’t say no, even if she desperately wants to since her dad is the one who helped fund her new business. There are a few times that her pushy nature is a bit much, but then you get an inside look as to why she is the way she is and you get sympathetic, understanding her intentions and giving her a little leeway for her attitude.

As much as Isla tries to avoid her attraction to Brick, there is something about the sweet man behind the persona he projects to the world. The more time they spend together the more she likes him, but can she give up her fears of the sport that took so much from her already?

Some of the story dragged, and I can’t place why because I was drawn into the connection Eric and Isla have for one another, and I don’t mind a slow burn romance, but there were times I wanted to push them along faster, if that makes sense.  While this doesn’t make it a bad read or one I didn’t enjoy, it was just something that made it less than a five star book and pushed it to a 4.5.

Growing up with an adoring father for a boxing legend isn’t all sunshine and rainbows. It looks more like hospital visits, bloody noses, and cracked ribs.

Isla Slade now works as a physiotherapist, helping athletes heal their bodies. Except for boxers. She has no interest in reliving the stress of her teen years. Dating someone in the boxing world? She’d rather snort wasabi powder.

Until she meets Preston Church.

Preston manages heavyweight boxing darling Brick Kramarov. A brute who’s built tougher than his name, with a cocky attitude to boot. She wants nothing to do with either man, but her father begs her to help them prepare for a huge Vegas fight.

She doesn’t expect Preston to recite romantic poems and slowly break her resolve. His fascinating mind gets under her skin, even if his star athlete reminds her how much she hates boxing.

Too bad it’s Brick coaching Preston how to woo Isla, falling for her from the sidelines. Once she finds out, she’ll have to decide if she can risk loving another man who puts it all on the line for the knockout.

2 thoughts on “Review – The Knockout Rule by Kelly Siskind”

"I'll never be owned by a man, much less my enemy."
🔥🔥TEASER BLAST🔥🔥
"You and me...we could've had everything."
Cover Reveal!! The Teacher of Nothing by @authorkwebster is coming October 18th!