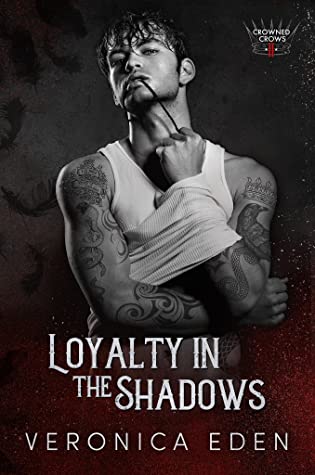 Loyalty in the Shadows; Crowned Crows #2
(#2 within a series)

A grumpy/sunshine, mixed with suspense made this dark romance a total page turner!

Isla and Levi were magnetic on the page. Their grumpy/sunshine banter gave laughter at the perfect moments especially among all the dark times. Isla’s sassy vibes not only threw Levi for a loop, but she threw him off kilter because she didn’t respond to his darkness like he thinks she should. It makes their chemistry off the charts and the funny moments really pop.

Continuing the suspense from book one, the Crows continue to look for clues into Rowan’s brother’s death and even more mystery is added as Isla Vonn is added to mix and her kidnapping attempt makes the plot thicken.

Attending the same prep school, Isla grew up with the Crows. Always attracted to the silent man in the shadows, she never suspected that Levi spent so much time in them because he was obsessed with her and once she came under their protection, that obsession grew into something more.

I loved all the interaction with the other Crows and the possibilities into where their stories could go. This book contained a lot of mystery, suspense, and steamy good times and I cannot wait to read more as the other boys to fall for their women and as they unravel more of the dark mystery.

𝘐𝘴𝘭𝘢
Thorne Point sunk its claws in me at a young age.
I refused to let its harsh truths snuff out my light.
When an attempt to kidnap me is stopped, I know they’ll never give up.
The city’s seedy underbelly won’t let me escape forever.
My only choice is to run into the arms of monsters for safety.
The Crows have a terrifying reputation, and Levi Astor lives up to it.
But my protective monster will never be worse than the ones who buried their ugliness deep in me.

𝘓𝘦𝘷𝘪
𝘓𝘦𝘷𝘪 𝘈𝘴𝘵𝘰𝘳 𝘺𝘰𝘶 𝘢𝘳𝘦 𝘶𝘯𝘥𝘦𝘳 𝘢𝘳𝘳𝘦𝘴𝘵.
Our unchallenged rule over this city is crumbling.
We’ll hunt down the ones behind this and make them pay.
𝘊𝘰𝘮𝘦 𝘰𝘶𝘵, 𝘤𝘰𝘮𝘦 𝘰𝘶𝘵, 𝘸𝘩𝘦𝘳𝘦𝘷𝘦𝘳 𝘺𝘰𝘶 𝘢𝘳𝘦.
Guarding the senator’s daughter isn’t on my agenda, yet I couldn’t ignore her if I tried.
Sunshine might break through the shadows, but it will only illuminate what makes me a deadly monster.
Isla Vonn should run in the opposite direction instead of into my arms.
Because everyone fears the Leviathan in Thorne Point.

Loyalty in the Shadows is a dark new adult enemies to lovers college romantic suspense intended for mature readers. This book is the second in the Crowned Crows series following a gritty brotherhood of antihero bad boys and the feisty heroines that capture their hearts. The plot continues across the next novels and each book in the series should be read in order. If you’re not a fan of morally bankrupt book boyfriends, steer clear. This mature new adult romance contains dubious situations, crude language, and intense sexual/violent content that some readers might find triggering or offensive. Please proceed with caution.

2 thoughts on “Review – Loyalty in the Shadows by Veronica Eden”